My mother turned eighty-five years old on January 26.  She’s a small, grey-haired woman with plenty of wrinkles.  When she was young, she had long brown hair and a pretty Italian face.  She and my dad were a handsome couple.  We used to laugh a lot together, and I can still get her laughing.  Wordsworth said that the child is the father of the man.  And so too the child is the mother of the woman.  You never really conquer what you were.  A poor girl in a poor town, with a poor mother and no father, breathing in the coal smoke, beset by worries, finds it hard to be happy as a woman.  You always jump when the phone rings.  Anyway, what my mother was and is helped make me, for better and worse, what I am.  Here’s a story I wrote.  My mother has read it.  I think she had mixed feelings about it.  It is from my book, In and Out of the Working Class. 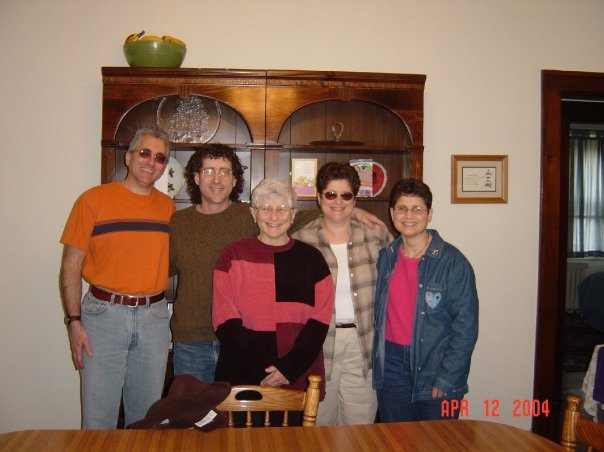 It was early in February, and Irene was waiting for the school bus along with the other high school students. They were all poor, the children of Italian immigrants, whose fathers worked in the coal mine down by the river. It was 1941 and the depression still raged, though there was more work now than there had been in a long time. She had come to this town just a few years before, after her father Dante died, when she was twelve years old. They had lived in another Pennsylvania town, a little bigger than this one and with some jobs available besides mining, but they had moved here to be close to her maternal relatives. Dante’s mother had insisted that Irene’s mother, Lucia, take care of Dante’s brother, but Lucia’s mother had forbade this.

It had been a hard few years; they were among the poorest families in what to an outsider must have appeared a uniformly desolate place. There was no regular employment for a woman, so Lucia took in laundry and mended other people’s clothes. She and Dan helped, struggling to carry water from the pump and heat it on the coal stove. Their house was rented from the coal company, a small place with tarpaper shingles and no indoor plumbing or central heating. The upstairs bedrooms were freezing cold. Fires were a constant threat, and just the past winter a neighbor’s house had burned, killing the family’s young daughter. Fifty years later, Irene still got depressed during the winter months remembering that fire.

As Dan laughed with his friends, Irene thought about things. She did not have many friends from the town in which the high school was located. This was a factory village three miles up the river. It was home to an enormous glass factory, one of the biggest in the world, and a large pottery. You could see the great piles of white sand used to make the glass on the other side of the old iron bridge that led into the town. The town itself, although modest in size, had many shops and bars and churches; one of the churches was made of stone and had marble altars and floors. Compared to the mining town, with its wooden church, company store, and tiny post office, the factory town was the big city. Most of the men worked in one of the factories, and their children, especially those whose fathers had better jobs, made up the “in groups” at school. They had nicer clothes, spending money, and old jalopies. They snubbed the poor “dago” mining kids. So did some of the teachers.

Irene felt the condescension and wondered if something was wrong with her. Her friends told her that she was pretty, but she doubted it. How could anyone from her town be pretty? Sometimes she wished she could be more like her brother. He had “the gift of gab” and lots of friends. He was wild and got in trouble, but nobody pushed him around. He was a boy though, and that made all the difference.

She felt more at home in the mining town. There was no shame in being poor here. Everyone was in the same boat and nearly everyone was Italian, so people stuck together and showed each other the small kindnesses common in such places. No one turned away the beggars who sometimes knocked on the door asking for food.

Irene was close to her mother. Women had it hard, but few so hard as Lucia. A husband might drink or be abusive (though Dante had been a rare non-drinker, stern but not cruel), but he could work and bring home the money. A woman without a husband might not have to worry about a man’s meanness, but she would have a terrible time getting money. And people would say that she should get a man instead of working anyway, though not many men were interested in a woman with teenage children.

So far, her work experiences had not made her especially keen on a life of labour. Her father and uncle had worked on their knees in the mine, sometimes in cold water; she remembered how they came home with their filthy clothes frozen stiff. Now she had to help her mother with the cleaning and cooking and the sewing and laundry. Dan helped, too; unlike most boys, he could sew and cook. He was considered one of the best-dressed boys at school, though he had only two pairs of pants. He ironed them every day so that they always looked nice. Her mother took pride in this and in keeping a spotless house. Poverty was no excuse for being dirty; she had nothing but scorn for people who didn’t keep clean houses.

But it was a lot of work. She didn’t think of herself as a good student, but she studied hard, and that took time. For several months, she had been getting up early in the morning to help her mother unload dynamite from the trucks at the mine. Many of her relatives walked past them on their way to work, but none of them helped unload the explosives, just like none of them intervened when the office manager had tried to grab her on a Saturday when she cleaned his office. It was hard to lift the heavy boxes, but they did it and went back home wheezing and gasping for breath. They all had asthma. Dante had had it too; maybe that’s what killed him.

She missed her father. Life had been easier when he was alive. He had been different from the other men. He could read and write, in both English and Italian. He would translate for the workers who could not speak English and help them get their immigration papers. He was dapper and could dance up a storm, though Lucia’s father had warned her about marrying a man who liked to dance so much. It was strange how Lucia would stand up to Dante and how he, himself, had been in mortal fear of his own mother, to whom he had dutifully given his paycheck even after he was married. Yet it was clear that Dante had been the “boss” of their household. She was a little afraid of Lucia, but if her father said her name in that special way, she knew she had better listen.

One thing Irene looked forward to in school was seeing her boyfriend Bud. He was two years older and a senior in high school. He would graduate this year if he didn’t play hooky too much. She felt lucky to have such a boyfriend, different, not only not Italian, but also not Catholic. Lucia did not mind this, but his parents were not so happy about her. They were strict Baptists, as quiet and reserved as the Italians were noisy and gregarious. They weren’t rich, but they were better off than her family. The father had worked all through the hard times as an engineer in the glass factory. He wore a coat and tie to work and even around the house. Bud could get a job there and have a steady source of money, and that was the main thing.

Bud wanted to get married as soon as Irene finished school. She hadn’t thought about saying no. If they married and he had a job, it would make it easier for her mother to get by. Maybe they could help out. If they married, her future would be secure. They would have a place of their own and start a family. He loved kids and so did she. She knew all about keeping a house and how hard could it be to raise children. That’s what women did, and she would have a good man besides. Not that she didn’t have dreams about being an actress or an artist. All girls did, but dreams came true for a different class of people. For people like her, only security mattered. She just hoped that the war everyone was talking about didn’t come.