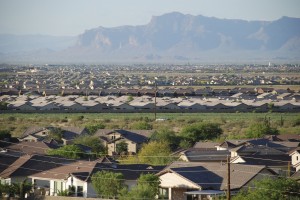 The motor force of capitalist economies is the accumulation of capital—the drive by businesses to make as much profit as possible and use as much of this profit as they can to expand their operations. The growth of capital is built into the nature of the system; it is relentless and never-ending.

To justify this growth, which has many socially negative consequences (environmental degradation and periodic economic crises to name two), the economic elite, their lapdogs in government, and the media they own, propagandize ad nauseam about the necessity of growth. Little thought is given to the nature of the growth or the distribution of the resulting income. Just growth. Any kind will do. Things will fall apart if we don’t have growth.

Karen pointed out to me a recent example of the “growth is good” ideology. During the housing bubble, Arizona grew rapidly. Retirees flocked to Arizona, drawn to the warm and sunny climate and relatively cheap housing. Their incomes, construction, an expanding military, and immigration all kept demand for goods and services brisk and state and local government tax coffers growing. The latter in turn generated a growing supply of schools, roads, police forces, and the like, and the incomes of state and local public employees added more demand. Most production was buttressed by cheap immigrant labor. The public relations hype extolling the climate and the low prices and wages operated on overdrive and brought in new residents and tourists by the hundreds of thousands.

Much of Arizona’s rapid growth was concentrated in the metropolitan areas surrounding Phoenix and Tucson. The population of Phoenix grew by 39 percent between 1996 and 2005, more than three times that of the United States as a whole. It is now the fifth largest city in the country, with about 1.6 million people. The greater Phoenix metropolitan area has more than four million inhabitants. There are seven nearby cities, also showing accelerated growth, with more than 150,000 persons. More than 500,000 people live in Tucson, and the great Tucson metropolitan region has a population in excess of one million. Preliminary estimates from the 2010 census show that nearly 82 percent of Arizona’s population lives in the Phoenix and Tucson metropolitan areas.

The Great Recession hit Arizona with particular ferocity. Along with Las Vegas and Miami, Phoenix, and to a lesser degree Tucson, witnessed an extreme housing bubble in the aftermath of the collapse of the dot.com bubble. Then, beginning in late 2006, the bottom fell out of home prices. The Case-Shiller Home Price Index showed an astonishing decline in Phoenix home prices of 34 percent between the last quarter of 2007 and 2008. Today, Phoenix is among the nation’s leading cities in terms of bank-owned real estate. In Arizona, nearly half of all mortgages are “under water,” meaning that the amount of the mortgage is greater than the sale value of the house (negative equity). More than 60 percent of all of Phoenix’s mortgaged-homes have negative equity.

The bursting of the housing bubble disrupted whatever virtuous circle of rising incomes and wealth–rising spending–rising employment-rising income and wealth, and so forth existed during the economic expansion. One decline led to another in a multiplier fashion, each fall reinforcing the next. A Brookings Institute study shows that both Phoenix and Tucson are close to the bottom of the largest 100 metropolitan areas in the United States in terms of overall economic performance—a composite of the change in employment, unemployment, total output, and housing prices since the Great Recession began. Falling employment or slow employment growth, high unemployment rates, negative or low output growth, and chronically depressed housing prices have been the order of the day, and there is little prospect for a strong recovery any time soon.

An economic collapse can be a good time for political and economic leaders and the general public to reassess the past and develop a plan of attack for the economy of the future. Arizona grew willy-nilly for decades, with little planning, no thought for the environment (especially water shortages, which are now critical and will soon be catastrophic), too many people in a fragile desert ecosystem, massive corruption, and poor or nonexistent public services such as transportation.

A perfect example of what went wrong and what should be done to avoid another boom-bust cycle is the area between Phoenix and Tucson, which sits astride U.S. 10. The 100-plus mile drive between the two cities is as unpleasant a drive as can be imagined. Cars and big rigs speeding along at 75 miles an hour. Daily serious accidents. Mind-numbing heat in summertime. Killer dust storms. Pollution so thick you can barely see the mountains and so poisonous that you have to keep the car windows up. Dry and unattractive desert scenery. Little water. The aquifer can only be reached by digging wells nearly a thousand feet deep. Not a place any sane person would live. Indians have lived in the Arizona deserts for centuries, and they could teach us much about how to survive here, but we don’t care much about them. So when I say that no sane person would live here, I am talking about the modern suburban and exurban United States.

Despite its many disamenities, the Tucson-Phoenix corridor, comprised mainly of Pinal County, grew phenomenally during the housing bubble. The county’s population nearly doubled in the few short years of the runup in housing prices, and it now is home to about 330,000 people. The words “home to” have to be taken with a grain of salt. Scrub desert and land previously devoted to irrigated farming were turned overnight into housing “developments.” Real estate entrepreneurs bought cheap land and put up tract housing in treeless desert; banks and mortgage companies offered subprime loans; house flippers got into the act; and, voila, “communities” sprang up, as if out of thin air. If you look into the distance left or right on Interstate 10, you see roofs, thousands of them. A more dispiriting site is difficult to imagine, but so strong is the lust for a home with lots of square feet that people flocked in droves to settle in Pinal County, willing to endure the long work commute to the metropolitan centers.

The Pinal County boosters promised that once the houses were built and sold, retail and other businesses would arrive to service the new developments and other companies in need of workers would be attracted as well. Soon all the accouterments of civilization, like schools, police and fire protection, sewage systems, water authorities, parks, libraries, and good roads would be provided.

This Field of Dreams vision never came to pass. In a recent series of articles in the Arizona Daily Star, here is how one Pinal County “town” is described:

The San Tan Valley, an unincorporated stretch of exurbia about an hour southeast of Phoenix, had about 4,000 residents in 2001. These days, it has about 80,000. It would be Pinal’s biggest city – except that it’s not a city. It’s just rows and rows and rows of homes along Hunt Highway in unincorporated Pinal County.

This explosive growth has created all kinds of problems. For example, there is no police force, so county deputies answer calls, and sometimes that can take awhile.

Meanwhile, the mostly two-lane Hunt Highway is clogged at rush hour as residents commute to and from Phoenix and Mesa. It would cost more than $129 million to expand the road to six lanes, and the county, which cut its budget by roughly $60 million last year, doesn’t have the funds to do that. The original plan was to pay for the six-lane expansion by bonding against future development, but then the housing market tanked. County officials still say that expanding Hunt Highway is a top priority. They just don’t know where the money will come from to do that.

Needless to say, the Great Recession has put San Tan Valley in dire straights. Mass foreclosures. Abandoned properties. People moving out or moving across the street to a rental property. An exurban wasteland, now reduced to luring gullible Canadians to buy the distressed properties.

So what do the county’s promoters and the economic experts say should be done? More growth, that’s what. Only growth they say—more people moving in to more homes—will save the day. The Star interviewed a University of Arizona economist:

Count University of Arizona economist Marshall Vest as a believer in the Sun Corridor and Pinal County’s place in it. Even with the recession, Vest foresees 10 million people living in the Sun Corridor by 2030, with Pinal as a key part of that growth.

The downturn may have slowed the growth machine, but it hasn’t stopped it.

Professor Vest apparently cannot imagine that growth could be bad, that it will destroy what environmental integrity is still left in Arizona. That it will impose tremendous social costs on everyone. That sometimes less is more. If rapid unplanned growth is the way forward, then we are in more trouble than we know.

Things could be different. Communities could be built to fit the desert. Limits could be placed on growth. But they won’t be. The system is too entrenched. Too much money is at stake for thought to prevail.