I.  [Note: This is a story from my book, In and Out of the Working Class.  I am posting it in episodes, so stay tuned!]

Sometimes a random event can change a person’s life.  Clyde Yassem was sitting in the firehall drinking stale coffee and sneaking a look at The Daily Racing Form when the emergency phone rang.  He answered it, thinking that this would be his first crisis call.

A woman’s voice said, “A pallet of glass fell on a guy down here in Packing.  He’s hurt bad.  Get here quick.  Park the truck by the first aid room.”

Clyde recognized the woman, one of the nurses.  Her sister was a nurse too, at the hospital.  While he was waiting for his first kid to be born, she’s brought out a black baby and told Clyde it was his son.  Thought it was a great joke.

Clyde ran down the steps and jumped in his truck.  He hit the siren, drove down the road in front of the fire hall, and entered the plant at an opening a few yards from the river. He snaked his way though the dimly lit corridors and stopped near a large overhead crane, beneath which was a large pile of shattered plate glass and where a large group of workers surrounded a man slumped on the floor.  Clyde ordered someone to help him with a stretcher. The nurse was cleaning wounds on the man’s head and arms. He was unconscious and his body was contorted into a grotesque position that reminded Clyde right away of wounded men he had seen in the war. The nurse said she had called the local hospital and they would be waiting outside the emergency room for Clyde’s truck.  Clyde and several of the men lifted the man as carefully as they could onto the stretcher, tied him in, and hoisted him into the back of the ambulance.  One of them agreed to go along and stay in the back with the injured worker.  Clyde started the engine and raced out of the plant and to the hospital as fast as he could.  He was nervous and gingerly hit the siren and pressed his foot down hard on the gas pedal.

The hospital was three miles away.  Clyde only remembered the noise of the siren and the lights of the swerving oncoming traffic as he changed lanes to keep up his speed.  As he sailed through a traffic light, he suddenly remembered who the man on the stretcher was.  A friend of his, Ed Smolen, one of the boys he’d enlisted with in 1941.  He delivered Ed to the emergency entrance, signed some forms, and hung around the waiting room for awhile.  Ed’s wife arrived, and Clyde tried to comfort her.  She kept saying. “What are we going to do if Ed can’t work.” A doctor came out and told him that they were performing surgery.  They wouldn’t know for a few days if Ed would recover.  He might as well go back to the factory.

Clyde Yassem was a factory worker.  He had been one for twenty-two years.  He hadn’t planned it.  At night sometimes, he lay awake next to his wife and wondered how it had happened.  As a boy he hadn’t had much ambition.  During the Great Depression it didn’t seem to make much sense to be ambitious.  Nearly everyone in town was unemployed or working short hours.  Parents found it hard to give their children encouragement about the future; they had little enough hope for it themselves.  So like his friends, he drifted through high school, barely passing most of his classes and skipping school at least once a week to shoot pool, go swimming in the river, or loaf at the drugstore.  The teachers seemed to accept their students’ indifference.  They hadn’t been paid regularly, and many of them had been laid off too.  The kids thought it was quite a joke when the truant officer was put on furlough.  The teachers didn’t know what to do with their charges, so they let them do what they wanted.  As did their parents.  Clyde’s mom and dad did put him in a Civilian Conservation Corps camp in 1938.  He hadn’t minded this, even though it involved hard work and army-like discipline.  At least it was something to do.

Clyde’s friends were gung-ho for sports.  His dad was a good athlete and still played semipro baseball in the summers.  Clyde liked sports too, but he wasn’t good at them.  He had been a sickly child and had spent nearly two years in a sanitarium for tuberculosis when he was two years old.  He was fine now, but he didn’t have much strength and stamina.  It was a sore point with him, especially when someone brought up his father’s athletic prowess.  To make matters worse, he was skinny, and this made him the butt of jokes, even among his pals.  In the rough-and-tumble world of the children of factory workers, physical vigor was a virtue above all others.  He still remembered with shame the times he had backed down from fights or was the last chosen in pick-up games of baseball.  Some big Polish kid, his head shaved for the summer, would say, “I guess we’re stuck with you, Clyde.”

Somehow he managed to graduate high school, probably because everyone who lasted twelve years did.  Kind of a consolation prize for perseverance in the face of bleak future prospects.  The following week, Clyde applied for a job at the factory, as did nearly all of his classmates.  It was 1940, and the looming war in Europe had put more men to work.  For the first time in years, new employees were being hired.  Clyde was among them, undoubtedly because his father worked there.  He remembered the first day, how nervous he was as he walked through the long tunnel under the railroad tracks into the plant.  He reported to a foreman amidst the noise, dust, and disarray.  The foreman said, “Don’t give me no shit, kid, and you’ll be OK.”  He was set to work packing glass into crates.  It was boring, hard work, but this was where everyone started.  He hoped that he might be able to get into one of the apprentice programs and learn a craft, maybe plumbing or electric, something he might use outside the plant someday.

Clyde slogged on for a year and a half.  He worked steadily, though not always full-time.  He was still packing glass, but his dad was trying to get him an apprenticeship.  So things might get better.  He had a steady girlfriend, a pretty Italian kid from the mining town down the river.  On weekends, he’d walk the six miles to her house.  She lived with her mother and brother in a small mining company shack.  He couldn’t believe how poor they were.  No bathroom, not even hot water.  The mother took in laundry and cleaned the local doctor’s house.  At one point they had all taken a job unloading dynamite at the coal mine along the river.  Miners used the explosive to open new seams of coal.  All three of them would walk down the steep hill to the mine and unload the heavy boxes.  After they finished, they stumbled home in the throes of asthma attacks and collapsed on the couch until breath returned.  His girlfriend eventually got a job cleaning the mine company offices on Saturday and once had to fend off the advances of the superintendent.  The mining village might be just six miles from the factory town, but it was another world. 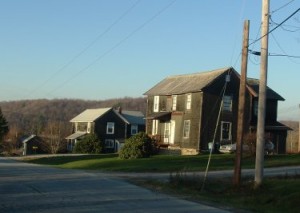