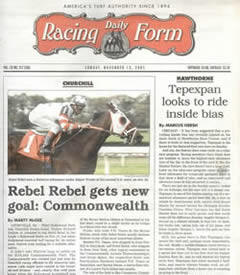 VII. By the time Clyde got the letter telling him the date of the arbitration hearing, he was nearly out of money.  He’d made house payments, but the rest of the bills were overdue and food was in short supply.  His parents offered to lend him money, but he refused to borrow from a man who’d never object to what the company had done.  He had made a little money betting the horses.  He had plenty of time to study the Daily Racing Form.  The old  guy who owned the newsstand that sold the form had been a union organizer in the thirties, and when Clyde told him what had happened, he let Clyde have the Form on the house.  He started making elaborate calculations and charts, picking winners and checking his choices against the results the next day.  He placed imaginary bets, and kept track of his winnings. They were substantial. Too bad he didn’t have money to bet.

He was downtown drinking coffee at Dot’s Diner, reading the sports section of the local paper.  “Hey, Clyde.  How you doin’?”  Clyde looked up to see his buddy Nick.  Clyde said, “Not too bad.”  Nick said, “You don’t look too good.”  Clyde filled him in on what had been happening.  Nick said he’d heard about most of this.  “What a fuckin’ shame, you deserve better.” Then Nick took an envelope from his pocket and handed it to Clyde.  “Don’t say nothin’.  Just take it.  It’s from some of your buddies.” Clyde started to protest, but Nick cut him short.  “Just take it.”  “See you around,” he said.  “Keep smilin’.” 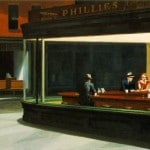 Clyde opened the envelope and counted out $300.  Enough to square away his bills.  He left the restaurant and started to walk home, thinking how happy his wife would be.  A conversation started in his mind.  “I know I could turn some of this money into a lot more at the track.”  “No, better not.  Might lose it all.  Give it to the wife and pay the bills.”  “Shit, take $100 to the track.  What harm could that do?”  When he got home, Clyde gave his wife $200 and told her what had happened.  Like he thought, she was happy.  The next day he told her he had to go into the city the following day to meet with some union bigwigs about his case.  He said he’d probably be home later in the evening.  “They’ll feed me something, so don’t worry about me for supper.”

He left the house at nine o’clock.  It was a two-hour drive to the track and the races started at one o’clock.  He’d get there early and study the Form.  He’d have time to go to the paddock and look at the horses too.  He kept feeling in his pocket to make sure the money was there.  His heart was racing when he pulled into the parking lot, paid the admission, and bought the Form.  He pulled his track records from inside his jacket, bought a cup of coffee, and found a place to sit and plan his picks.

When he bought his entrance ticket, he got a program.  He started to leaf through it.  On the inside cover page, he noticed a promotion the track was running that day.  The admission ticket had the same number at each end.  Patrons were to rip their tickets in two and place half the ticket inside a steel drum near the track entrance.  Ten tickets would be drawn before the first race, which had ten horses scheduled to run.  The holders of these tickets would then bring their halves down to the starting gate for verification.  Ten tickets with numbers from one to ten printed on them would be drawn from another drum, one ticket drawn by each of the ten winners.  The number on the ticket you drew would identify a horse in the first race, number one would be the horse in the number one gate, number two would be the horse in the second gate, and so forth. Whatever a particular horse won in the race would also be won by the holder of the ticket with that horse’s number.  So if you were one of the lucky ten initial winners and you drew the ticket with the number three stamped on it, you would win whatever the number three horse won that day.  In this race, the winnings distribution was

The chance of winning anything was small, but Clyde figured that there was no risk in putting half his ticket in the drum.  So he did and went back to the Form.  He was engrossed in his calculations and jumped when he heard the track announcer’s voice telling everyone to turn their attention to the starting gate.  It was forty minutes before post time, and the contest drawing was about to begin.  Clyde grabbed his ticket from his shirt pocket and waited for the drawing. He memorized his ticket number and when the ninth ticket was drawn, he heard the first three numbers on his ticket.  He had a premonition that the next two would match as well, and when they did, he gave a silent shout.  He ran down to the gate and showed the track official his stub.  He exchanged congratulations with the other winners and waited for the next drawing.  He was the ninth person to pick.  He reached into the drum and quickly took one of the two remaining tickets.  Number nine.  The ten men were admonished to hang on to their stubs and the numbered ticket.  The winners were to bring them to the track office right after the race.  “Be sure to have ID,” he told them.

Clyde hadn’t planned to bet the first race, so he didn’t know the horses running.  His hopes sank when he looked at the Form.  The horse’s name was Bud Bratty, a four-year-old gelding that had never won a race.  A maiden running on the outside in a six furlong sprint.  What could be worse?  Only that Bud Bratty had never even finished in the money and had lost its last five races by at least fifteen lengths.  At the end of the Form record of each race a horse had run, there was a line with a brief summary comment.  Three of them said, “Trailed far behind.”  One said, “No factor.” Another said, “Stumbled at gate.”  Clyde’s trained eye did notice that in the last race, a distance run of a mile and a quarter, the horse had started well and had led at the half-mile mark.  The track condition was listed as “muddy,” and maybe that was a good omen since it had begun to rain about an hour before.  But a nag coming out of the nine hole would have to burn a lot of energy getting to the front of the pack.  Bud Bratty wouldn’t have anything left after that.

Clyde was standing by a betting window, three minutes before race time.  He wasn’t superstitious, but he thought it was weird that he was the ninth person called, the ninth to pick, and his horse was number nine.  When he heard the announcer yell out that it was one minute to post time, he rushed to the window and said, “A hundred dollars on number nine to win.”  He had never made this large a bet in his life.  If he lost, he’d have to go home broke.  He ran down to the fence by the finish line and looked at the tote board.  Bud Bratty was forty to one.  He watched the horse enter the starting gate.  His horse looked okay; it was calm and had clear eyes.  His jockey was talking softly to him.  The jockey’s name was Santiago.  A decent rider, he’d been on Bud Bratty that last trip in the slop.  Some late money drove the odds down to thirty to one.  Clyde thought, “Maybe something’s up.” 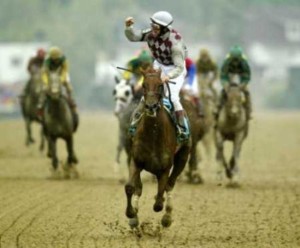 In the movies, the longshot comes from far behind, like Seabiscuit used to do when Clyde was in high school.  The gambler would scream in joy and hug his girl friend.  Damon Runyon stuff.  But Bud Bratty raced to the front and stayed there.  Wire to wire, won by three lengths.  Clyde started to smile and couldn’t stop.  He had won $4,000. Half a year’s pay.  First he went to a cashier’s window and watched him count out and hand over thirty one hundred dollar bills.  Clyde put them safely in the inside zippered pocket of his jacket, watching that no one saw him do this.  Then he went to the track’s main office and got a check for $1,000.  The man who gave him the money said, “You probably never thought that horse would win.  You’re a lucky man.”

Clyde stayed for three more races, but he didn’t feel like betting.  He was nervous about the money.  He looked over the card for the fifth race and decided to go home.  Outside the turnstile, on his way to the parking lot, he saw a bunch of discarded tickets.  He picked them up and riffled through them.  He saw a 9 and looked at that ticket.  It was a $10 win bet on Bud Bratty.  Some fool had thrown it away.  He went back inside and collected another $300.

He was laughing so hard that he nearly ran into a truck as he pulled out of the parking lot and onto the highway.  Money!  He could live for months on this.  Time enough to win his arbitration.  Get back to work.  Start a caucus in the union and soon enough, get elected president.  Sell football pool sheets out of the union office. Give half the money to the strike fund. A new life from a day at the track.  Maybe he was a lucky man.