Home /A Nation in Decline?: Part 2: Signs of Distress 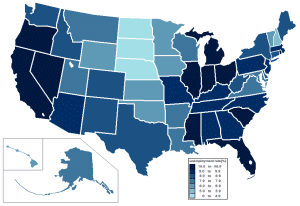 The impact of the U.S. economic crisis has been geographically uneven (see map). You can’t miss it in Las Vegas, where there are half-constructed homes, ubiquitous “For Sale” signs, abandoned shopping plazas, and homeless and half-crazed men and women, in sharp contrast to the scene there a few years ago. But in Boulder, Colorado you would be hard-pressed to find such evidence. Housing prices have not collapsed; rents are astronomical; tourists abound; bars and restaurants are crowded; and the unemployment rate is low. There are problems.  Small retail shops have closed; there is an inordinate number of sole proprietors (which could be a sign of inadequate decently-waged employment); there are many homeless persons; and much of  the grunt work is done by Latinos who can’t afford to live in Boulder or, if they do, live in substandard housing. Yet, these same features have probably marked Boulder for years, predating the economic downturn. There has been a significant increase in people seeking food assistance in Boulder County, but this includes a much wider area than the city proper.

In most places, the data and stories in the local newspapers and on radio and television tell us that there is plenty of economic distress. We know from research studies that rising unemployment and inequality have deleterious effects on mental and physical health—depression, hypertension, cardiovascular disease, cirrhosis of the liver, suicides—and are correlated with family problems, arrests, prison admissions, poor school quality, increases in admissions to mental hospitals, and many others. The official unemployment rate rose from 4.6 percent in 2006 to 9.3 percent in 2009; it was 9.5 percent in July of this year. If we count those who have dropped out of the labor force and those working part-time involuntarily, the national (expanded) unemployment rate skyrockets to 16.5 percent. Among Black and Hispanic persons, the unemployment rate is much higher, 15.6 and 12.1 percent respectively in July; the expanded rates for each group are well in excess of 20 percent. The inequality of both income and wealth are higher than at any time since the late 1920s and have been rising since the mid-1970s.

But if we know what is happening, finding personal evidence isn’t as easy as it would have been in 1933, when you could see the “Hoovervilles” on the outskirts of towns, witness the mass migration of dust bowl-driven sharecroppers from the Midwest to California, see the breadlines, or participate in a collective standoff with sheriffs trying to evict a family. Today, the miseries created by economic crisis don’t show themselves so obviously. A family loses its home and goes to live somewhere else. The members of the household may face all sorts of traumas, but we don’t see these. A longtime employee loses her job, but she just goes home and searches for another one. If she loses her health insurance and gets sick, she finds some kind of treatment or just stays ill. Mexican immigrants are fired after a raid by ICE officers, but they simply languish in jail or are deported. Their kids are sucked into the maws of the social service agencies. An old man’s retirement income is cut, but he just finds his way to the nearest WalMart and gets a job greeting people at the door.

Where there are no mass movements to speak for the afflicted, their plights are individual, and unless you seek them out or keep your eyes and ears wide open and close to the ground, you won’t see or hear them, except in the sensational cases that make the news: the fired worker who returns to his place of employment and opens fire; someone facing bankruptcy commits suicide or kills his family; a young Mexican immigrant robs a bank to help support his family; an employee beset by debt embezzles money. Again, all individual responses to individual crises.

We have been traveling up, down, and around the United States for more than nine years, and here are some of things we saw and heard during our recent six-month trip that I think show the stress caused by a failing economy, things we hadn’t seen or heard before and which a casual observer might miss:

*panhandlers in places you might not expect. On the flower-lined main street of the coastal Oregon town of Florence, we saw obviously destitute men sitting on the sidewalk among the tourists, with signs asking for money. We’ve been visiting Florence since 2003 and never seen this.

*hidden poverty showing its face. In the upscale town of Healdsburg, California, we saw a long line, snaking around the block, of mostly brown-skinned men, women, and children at a food bank. On the main streets, with their restored buildings and inviting shops, we saw only white people.  In Casper, Wyoming, a town with a fairly low unemployment rate and overwhelmingly white, a similar line waited for a Goodwill store to open.

*travelers with nice cars and, as we could tell from talking to some of them, above average incomes, staying at cheap motels and hostels. We met hostellers who were attending professional meetings and classes but staying in hostels to save money. In Estes Park, the cheapest motel in town was busier than we had ever seen it. In Las Vegas and Reno, hotels are practically giving rooms away, so slow is business. In Reno, we got a room for $49, with two more nights free and about $50 in restaurant coupons. The room was larger than our New York City apartment and had two bathrooms.

*businesses with storied histories closing their doors. The Macy’s in Missoula, Montana, which takes up an entire block, sits empty. Dan’s Western Wear, a fixture in Sheridan, Wyoming for ninety years, will shut its doors when its inventory is gone. Empty storefronts abound in every small town we visited. In cities such as Las Vegas, entire shopping malls are vacant.  A large housewares retailer on trendy 23rd Avenue in Portland has cut its operations to four days a week.  No business seems immune to suddenly ceasing to operate.

*extraordinarily deep discounts in house and condominium prices. We saw a condo building in Las Vegas offering a 60 percent price reduction. Prices have fallen dramatically in the green and desirable Civano development in which we lived in Tucson just two years ago.  A brochure in Portland advertises remarkable price reductions (click on brochure). 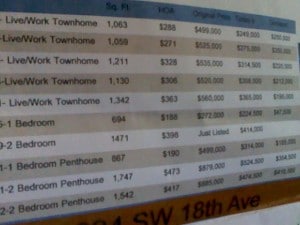 *strangers offering tales of troubles and acting out in public. A woman in a hostel tells me she has just lost her job at PBS. Motel room attendants tell us that they have to clean more than twenty-five rooms a day. Others say they can’t sell their houses; several now carry two mortgages because they moved and can’t sell their old residence. Innkeepers bemoan the lack of customers. A young couple on a park bench in Portland are both unemployed but thankful that the farmer’s market accepts food stamps. A young woman wants to rent a motel room for a month in Buffalo, Wyoming; she has no other place to live. We have, for the first time, seen people openly crying on town and city streets. Others shout and scream at one another, oblivious to their surroundings. Too many people walk with “their heads bowed down.” I don’t like to tell anyone anymore that I retired at age fifty-five. Not many people with whom we have spoken can imagine doing that.

*public facilities are deteriorating. Streets are dirtier. Roads are falling apart. Public offices aren’t open every day; in Grass Valley, California, city hall is closed on Friday. The Las Vegas Museum of Art is closed every day. The street lights have gone out in Colorado Springs. Whatever public property and services towns can sell, they are— to private operators and contractors.

In the face of all this, those hurting the most are left with little choice but to rely on family or friends and whatever charities and public aid they can find. Unfortunately, many charities are themselves struggling to find money; in Tucson a charity couldn’t raise money to buy Christmas toys for poor kids. Governments at every level have either radically reduced social welfare spending or made it clear that they are going to do so soon. There is no doubt that the federal government’s economic recovery efforts helped avert a national economic catastrophe. However, not nearly enough money found its way into the pockets of the working class, nor did it translate into bountiful employment. Some jobs were saved, but few new ones were created. The only overt sign of public employment spending is highway construction, where signs of federal largesse abound (see photo). 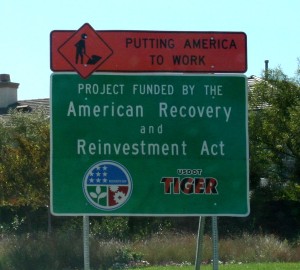 We have seen these on scores of roads. The only trouble is that we saw lots of machines but not many workers. On a long stretch of Interstate 90 in Western Montana, we kept being forced into one lane by construction barrels. We didn’t lay eyes on a single worker. What is more, the money the government has spent, on highways and nearly everything else, has gone to private sector business firms. Public works projects like those so common during the Great Depression (whose benefits are still being enjoyed by the public) are nowhere to be found.

The ethic of the government’s recovery program is one in which the working class is seen partly as a victim and partly to blame for its own sorry state. Enough help will be given to keep people from exploding but not so much that ordinary folks might begin to think that they have rights. The bankers and the great Wall Street capitalists have rights; the rest of us have to fend for ourselves. At the beginning of the last post, there is a photo of a sign in the window of a Portland dry-cleaner. It reads: “If you are unemployed and need an outfit cleaned for an interview, we will clean it for FREE.” Note the word “need.” Human beings have needs: for food, shelter, clothing, healthcare, comfort in old age, and many more.  It should be the duty of a society to do the best it can to see to it that these needs are met.   The greedy, swinish lords of finance have enough money to meet their needs and then some.  Yet President Obama has seen fit to shower still more money upon them, while pretty much ignoring the basic needs of the people.  Now his popularity is swooning, while the rich are turning against him because he  wants to put in place extremely mild constraints on their “right” to steal our money.  I wonder if he ever thinks that he would have been in a lot stronger position now if he had worried less about those at the top of the heap amd more about the needs of those who produce the nation’s goods and services. 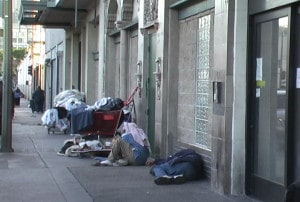