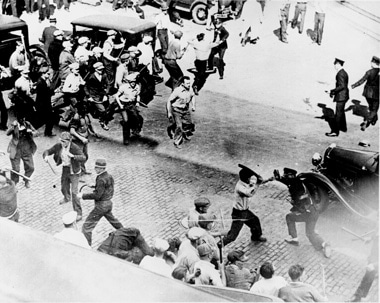 We are on our way to Amherst, Massachusetts, where I will be teaching a two-week course in labor economics to labor union brothers and sisters.  I have been a labor educator for thirty years. I have taught working people, mostly union leaders and members, a wide variety of courses in all kinds of settings. I have taught economics to auto workers in eight-hour seminars held in motel conference rooms, collective bargaining to local workers throughout Western Pennsylvania in six weekly three-hour classes meeting in smoky union halls, labor economics to union leaders in an MA program at the University of Massachusetts at Amherst, and online classes at other colleges and universities.

The labor education I embrace is “radical.” My goal is to help students grasp the nature of our political economy, to see it as one riven by class conflict, driven by the exploitation of wage labor by the capitalist class, and in need of radical transformation. By radical transformation I mean a movement toward an economic system based upon cooperative production, democratic decision-making, egalitarian distribution, and a thorough reorganization of work relationships— in a word, socialism.

While working people are often enough unhappy with their work, or lack of it, and alienated from the political system, they ordinarily do not have a very clear understanding of the nature of our political economy or a desire to radically transform it. Why is this?

Karl Marx hinted that the defining feature of the political economy, namely the accumulation process—the incessant drive by employers to make money and expand their operations—would help to educate and radicalize workers. The accumulation of capital, he showed, cannot take place unless workers can be compelled to work hard and long enough to produce an output that, when sold, returns to the capitalists an amount of money greater than what they have to pay the workers. To make sure that this happens, employers have to gain as much control as possible over the way the workers perform their jobs. They have to control what we call the “labor process”; if the employees  command it, they can prevent employers from extracting  the surplus labor time that ensures their profits.

Employers use many techniques (control mechanisms) to get workers to do their bidding. They herd them into factories, divide their labor into interchangeable details, mechanize as much work as possible, use time and motion studies—pioneered by Frederick Taylor—to systematize all other control techniques, employ systematic hiring methods, fire recalcitrants, and force their employees into submission when necessary. However, despite the effectiveness of what employers do, their methods sometimes have unexpected consequences, or as we say, they operate in contradictory ways. They can educate workers directly, through the concrete work experiences they generate. For example, workers in factories are easier to monitor, but they are also more likely to understand their commonalities than are workers laboring in isolation in their homes as they did before the rise of the factory system. And people who see themselves in others are more likely to make common cause against their employers. The detailed division of labor, in which formerly skilled labor processes are subdivided into unskilled details that are each assigned to different workers, makes laborers more alike, as does the mechanization of production, and these once again make collective action plausible to imagine. All of the control mechanisms treat workers as commodities, to be bought just like tools and machines, and they are all implemented on the assumption that employers own the capacity of employees to work just as surely as they own these same tools and machines. Workers are bound to resist them, since they deny to the laborers their humanity, their innate ability to think and to act.

If the accumulation of capital itself did, in fact, educate workers as to their true circumstances, then class consciousness and class struggle would occur more or less spontaneously. As capitalism developed and became a universal mode of production, working men and women would develop their understanding apace, sooner or later realizing that it spelled their doom.

We know from history that such spontaneous education and radicalization do occur. Unskilled immigrant mill workers might talk about their jobs in bars and social clubs. They are well aware of the horrendous conditions they face every day, and they complain bitterly about them . One day, a particular event, such as an accident, the unjust firing of a coworker, or particularly brutal treatment by a foreman occurs and their anger boils over, leading them to walk off the job. A strike and probable employer and police repression could both educate and radicalize formerly passive factory hands. As an old man said in a film about Eugene Debs that I used to show my classes (I paraphrase here), “When a policeman’s billy club hits your head, this is a most educative experience.”

However, while understanding can arise naturally, there are just too many forces at work in capitalist society militating against this happening often enough to challenge the power of capital. For example, management’s denial to workers of their innate capability to conceptualize work, to function as full human beings, can make them incapable of understanding what is happening to them. To paraphrase Adam Smith, doing repetitive work all day, which is what the detailed division of labor and machinery compel, makes a person as stupid as it is possible for a person to be. And even if objectively workers are an undifferentiated mass of detail workers, subjectively they are not. They are still of different races, genders, religions, and nationalities, and employers can and have exacerbated such differences, ruling by dividing. Mandatory public schooling teaches workers to be obedient, to salute the flag, to conform in a hundred and one ways, and these disrupt solidarity. Love of country, inculcated by the schools, the media, the government, and most other social institutions, substitutes hatred of the people of other nations for hatred of the bosses. Employers disperse production geographically, destroying the working class communities that served as centers of resistance to the rule of capital.

No matter the circumstances workers face, some of them will figure out what is going on and try to do something about it. This might be because they can read and write or made a chance acquaintance with someone who can teach them the facts of capitalist life. A workplace event might trigger the desire to figure things out. At the same time, some persons outside of the working class, like Marx himself, will gain a critical understanding of the political economy and be led to try to educate workers to gain it as well.

Once some comprehension is achieved, action must follow. A more or less natural step will be to organize around workplace issues such as long hours and low pay or issues of control of the speed of work and the ways in which the work is done. Usually led by skilled workers and aided by radical intellectuals, workers form labor unions to confront their employers collectively. A union is, among many things, a means through which workers educate themselves about the nature of their position in society. Through their collective actions, working people learn about the exploitive nature of the economic system, and they gain confidence in their ability to do things themselves. In certain situations, such as mass or general strikes, they may grasp that they have the ability to organize production and distribution. By their nature, unions are egalitarian organizations, and they may foster cooperation and understanding between men and women and blacks and whites. The shorter hours, higher wages, and better working conditions that unionization brings will themselves allow workers the time, money, and better health necessary for further self-education.