Home /A Land Grant in Maine: The Gift That’s Been Giving Since 1767 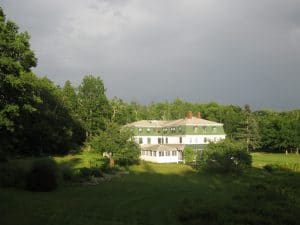 This past summer, we stayed at Oakland House Seaside Resort, in Brooksville, Maine, along the Eggemoggin Reach in Penobscot Bay. The property is large and consists of several business entities. We lodged in the hostel, which is a remodeled old farm house, with six private rooms, kitchen, dining/living area, and a small library. Room rentals range from $40 to $85 per night. Surrounding the hostel are ten upscale cottages, nicely furnished, with stone fireplaces, daily rates ranging from $165 to $278. A luxury summer resort hotel, built in 1889 and no longer operational, houses the administrative headquarters as well as some of the employees.

The property’s website provides a brief history, and there we learn that the land was a grant from England’s King George III in 1767 to John and Hannah Billings, direct ancestors of the current owners. What they had been granted was extensive; the road that now traverses the land and bears the name of one of the Billing’s progeny is three and a half miles long.

For a few generations, the Billings and their heirs used the land for farming, quarrying granite, and cutting, storing, and marketing ice from a large fresh water pond on their property. The surrounding area is famous for its high quality granite, and stone from the Billings’ quarry “was used to build the towers and anchorages for the Brooklyn Bridge, and several Federal buildings, including the Bronx Court House in New York.” The ice operation was similarly not confined to local buyers. Ice, which was stored in what is now the hostel, was shipped to venues in California and even China.

In 1889, Billings’ descendant, Flavilla Herrick, and her husband, retired sea captain Emery Herrick, decided to use the beauty of Maine’s coastline to lure rich tourists to the area. They sold their shipping interests and some of the land and built the Oakland House hotel, which opened on July 4. Maine had already caught the eye of affluent Eastern city dwellers eager to escape the summer heat, and they soon began to arrive at the new hotel and later to the cottages built for some of them. They sailed, canoed, and kayaked on the bay, visited local islands, and “rusticated” by helping with the farming and tending the cows. The three-story hotel, with an attractive mansard roof, featured a fine dining restaurant, a long wraparound porch, and well-appointed rooms. It flourished for more than a century, attracting in its later years the same kind of clientele that came when it opened.

Today, with the hotel closed, we wondered how the estate generated enough revenue to stay in business, especially given what to us seemed like a larger than necessary staff. If every room in the hostel was taken and every cottage rented, an estimate of the daily take would be between about $2,000 and $3,300. We estimated a maximum yearly revenue in the neighborhood of $425,000. Not bad, but given expenses, not a fortune.

However, we learned that there is at least one other Oakland House business: a nearby kids’ summer camp. In operation for nearly a century, Robin Hood Camp charges $11,000 for a full seven-week stay, plus a $500 application fee and $600 for uniforms. Shorter stays are cheaper, but the weekly rates are higher. Prospects must undergo an interview and have a teacher’s recommendation, no doubt to avoid disruptive children. Counselors come from around the world.

All campers have access to some 35 sports and activities, and each boy or girl can also choose from a large number of specialties, including golf, tennis, squash, soccer, and wakeboard/waterski academies. The academies all feature professional coaches, some from abroad and at least one world champion. Besides the cost for tuition and uniforms, there are fees for laundry and the many extracurricular activities and trips available to the campers. The latter include Three Day Yacht Cruise ($395), 2-Day Boston Trip ($395), Whitewater Rafting Expedition ($185), Scuba Certification Course ($575+$169 ELearning Fee), and New England College Tour $600.

It struck me that the Oakland House operation and the website narrative encapsulate the nature and history of U.S. capitalism. Marx tells us that human beings create value, that is, produce useful things—food, clothing, shelter, tools—by combining their physical and mental capacities with the natural world in which they find themselves. When the Billings became recipients of the king’s largesse, Penobscot Indians (the name is a corruption of the group’s name for itself, which is Penawapskewi) had been living on their land for 11,000 years. But by 1769 they had been decimated by European diseases and violence, their population falling from about 10,000 in the early 17th century to under 1,000 by the end of the 18th century. On this land, they had gathered, hunted, and engaged in small-scale farming in a land of relative abundance. Doing what our species had been doing for more than 100,000 years, most of our time on earth, producing collectively for immediate use. The sources of value were, in such societies, labor and nature, considered jointly and inseparable.

Unfortunately for the native peoples of the United States, by the end of the eighteen century capitalism was deeply entrenched in England and its colonies and becoming more so every decade. Capitalism wrought a radical change in the concept of value. Value in use gave way to value in exchange. Now objects only had worth if they were directed at the market and profitable sale.

This had many and profound repercussions, in the realms of both action and thought. First, private property came to hold pride of place in the new economic system. Those who supply the market cannot be secure unless they own the capital (land, buildings, and all other forms of capital) they must put into action to make money. To get landed property, those with means, aided by governments like that of King George, simply took it by force, evicting those who had previously occupied it. Once taken, the power of government stood ready to defend it. Then, those who sought to justify what had been done, argued that only land held privately could be maximally productive, precisely because its owner alone reaps the value of its productive use. By the same logic, private property was said to the mother of invention, for why would anyone innovate without the knowledge that the reward would be theirs. The Billings and other property-owning colonists began to take these notions for granted and assumed that they had an inviolable right to their land. By contrast, the Penobscot, with no notion of private property and sale for the market, were considered primitive and, to put it bluntly, unworthy to work the earth that had been their home for millennia. This served as ample justification for taking their lands and denying them the right to live on them.

Second, those who organized the new market-driven enterprises, the capitalists, came to be seen as the source of value. Oakland House Seaside Resorts’ history, according to the website account, is one of continuous waves of “Yankee ingenuity.” Successive owners discovered ways to make money so that the property could be kept in family hands and, in addition, generate a good deal of income to repay the “ingenuity.” The Billings and the Herricks, in other words, created value in their various undertakings because of their cleverness. They are the heroes of the story, so to speak. The underlying assumption is that generations of guests and workers—in the quarry, the ice business, the hotel resort, and the children’s camp—would not have been able to earn a living or enjoy wonderful summers had it not been for the hard labors of the owners. This is much the same logic used by those who say that had Andrew Carnegie not been an industrial genius, the towns around Pittsburgh wouldn’t have been so prosperous and the country would have been deprived of all the libraries he built.

Third, if the entrepreneurs are solely responsible for bringing value into being, then other possible sources must be discounted. Capitalism is marked by a sharp division between a relatively small number of property owners and a large group of wage workers whom they hire, along with varying classes of indentured persons, most notably slaves. Rather than viewing these individuals as generating value through their work, as should be obvious, they are seen as both beneficiaries of the employer’s value creation (where would the jobs come from if not for private enterprise?) and as possible impediments to production (workers and slaves are, to use Frederick Taylor phrase, systematic slackers). The fact that it is impossible to explain profits without an admission that the workers hired by the Billings and the Herricks and their capitalist brethren were exploited, paid wages less than the revenue generated by their efforts, is denied. And made to seem preposterous by capitalism’s legion of apologists. What is more, at the root of New England capitalism was the slave trade and slavery itself. Slavery fueled the Industrial Revolution; “Yankee ingenuity” would have been useless without it. The tortured bodies of slaves were a primary source of the incomes that allowed Oakland House to be built and the guests at Oakland House to enjoy the wonders of Maine.

Remarkably, nature, the other of the two original fonts of value, is simply taken for granted, something exploited to generate exchange value. Capital, so the story goes, harnesses nature and makes it productive, as if prior to the existence of capital, nature was dormant and sterile. It was the ingenuity of our Maine family and not the land grant that gave them property to exploit that had made them what they were and are today.

Proudhon famously said, “Property is theft.”  The rulers of England, France, Spain, Portugal, and Holland colonized the Americas by force, simply taking land to which they had no human right. When those who were there when the Europeans arrived rebelled, they were killed or compelled to move elsewhere. The land grant made to the Billings nearly 250 years ago made them complicit in theft and therefore not legitimate owners of this considerable wealth. Yet, own it they did, and it has provided the bedrock basis for the prosperity of many generations. It allowed them to hire workers and to secure bank loans. It gave them social standing and influence. Barring catastrophe, it will do the same for many generations to come. Capitalists may die but their wealth lives on.

This essay, minus the links, first appeared in Counterpunch on September 2, 2016