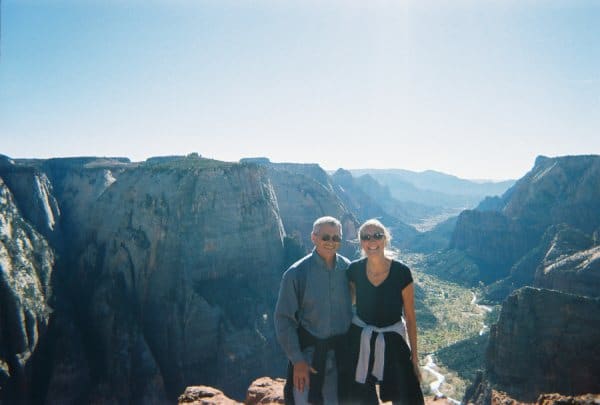 For the third time in four years, we visited southern Utah in November. There are five national parks here and many other beautiful public spaces. I don’t think there is a more spectacular place in the country. The high sandstone cliffs of Zion National Park, the hoodoos and fantastical shapes of Bryce, the upheaved earth and gigantic rocks of Capitol Reef, the Delicate Arch in Arches, and the harsh grandeur of Canyonlands all make you happy that the national government has not caved in completely to the private interests that would mine and drill every inch of these special places if they could. And I doubt the Mormon hierarchy would try to stop them. I can’t imagine that Orrin Hatch is a “vagabond for beauty,” like Everett Reuss, the intrepid young chronicler of these vast and sparsely settled lands.

We left Boulder, Colorado at five o’clock in the morning and, helped by the light of a full moon, made our way south to Interstate 70, passing through Golden, where the Coors Brewery pollutes the air, while it produces the brew that helps fund the far right. Coors’ advertisements would have us believe that it makes its beer in the Rocky Mountains. The truth is that Golden is just another sprawling suburban mess, its developments of oversized and cookie-cutter houses mocking the foothills, canyons, and mountain streams nearby.

Interstate 70 traverses the whole of Colorado and most of Utah. In these states, it is an engineering marvel, winding its way through, around, beside, and over mountains, canyons, and rivers. We were horrified to see the dead pine trees, killed by infestations of beetles, that cover the mountain slopes west of the Continental Divide. Their brown visages are more disturbing to the eye than even the long ski-slope scars above the ski slums that attract thousands of enthusiasts every winter weekend, clotting the highway with huge traffic jams on Fridays and Sundays. Towns like Vail were developed in part by well-connected ski paratroopers from the Second World War. I wish these expert skiers had stayed back East and left the mountains alone. Development for whatever purpose seems to know no limits; nature and beauty always take a back seat to naked self-interest. Vail is a monument to this.

West of Vail the land becomes markedly drier. As you approach Grand Junction, the Grand Mesa, largest in the world and reaching heights over 10,000 feet, stretches for miles and anticipates the strange land formations of southern Utah. Between Grand Junction and the Utah border, a short trip south takes you to the Colorado National Monument. There is a twenty-three mile rimrock drive that offers spectacular views and outstanding rock formations. Monument Canyon cuts through the entire park.

Interstate 70 in Utah has to be the most scenic interstate highway in the country. It is difficult to concentrate on driving when out your window there is such grandeur. Fortunately there wasn’t much traffic, and there are plenty of viewing points, with nicely engineered off and on ramps. A good place to take a break is at the San Rafael Swell Overlook. The highway divides this “giant dome-shaped anticline of sandstone, shale, and limestone that was pushed up millions of years ago” into its northern and southern parts. The wikipedia articles goes on to say that, “Since that time, infrequent but powerful flash floods have eroded the sedimentary rocks into numerous valleys, canyons, gorges, mesas and buttes.” Just last week I was reading Jeffrey St. Clair’s collection of essays on the destruction of our environment, Born Under a Bad Sky: Notes from the Dark Side of the Earth. One of the essays is about the San Rafael Swell. After noting that “The old desert rat Edward Abbey praised the Swell as one of the most austere and beautiful places in the desert Southwest,” St. Clair goes on to provide the inglorious details of an almost accomplished land swindle in which Utah was to trade some worn out state lands to the federal government for a good part of the Swell, which would then be leased to “strip miners and oil and gas companies.” For all their piety, the Mormons who run Utah don’t always have much love for God’s great earth. Mammon may be a false god, but it is worshiped nonetheless, by Mormons and most of the faithful of the many other variants of Christianity.

We felt twinges of guilt as we passed the farming town of Richfield. Our friend Dwight lives there, and we weren’t going to stop for a visit. If we had, we would have driven to Zion National Park via Highway 89, south through the Long Valley, which is dotted with little Mormon villages like Panguitch, where the trek across the Escalante Desert to the Hole in the Rock began. Not far from Richfield on 89 is the Big Rock Candy Mountain. I was astonished to discover that there really is such a place, named apparently as a joke after the famous song was released in the late 1920s.  There aren’t any “cigarette trees” or “lakes of stew,” and no “little streams of alcohol come a-trickling down the rocks,” but the mountain does look like candy, like striated pieces of multi-colored licorice.

Just a few miles before Interstate 70 ends at Interstate 15, there is a state historic park worth a visit. When the highway was under construction, the government hired archaeologists to see if there were any important artifacts that the building of the road would destroy. The social scientists investigated and duly issued their report, which gave the highway a clean archaeologist bill of health. Not long after, a teacher was telling students about the ancient Indian peoples who had once lived in the area. One told his parents, who, along with many local farmers, knew of a nearly perfectly preserved pit house in the path of the road. When the locals notified public officials, it became apparent that the archaeologists had been less than truthful. However, the highway plans were not changed, even though they could have been. The site was destroyed, although artifacts were removed. You can see what is left at the Fremont Indian State Park, along with a model of the demolished pit house. When we visited the park, we enjoyed the walking trail from which you can observe many petroglyphs and pictographs. On a high cliff across the Interstate, there is a remarkable flag pictograph. All in all, though, it is hard to get past the dishonesty of the social scientists and the callousness of the government in bulldozing what must have been an amazing marker of our nation’s past.

We took 15 South toward Las Vegas. Billboards trumpeted the “loose slots” and $24.95 a night motel rooms in Mesquite, Nevada. Twenty miles or so south of Cedar City, we turned left on Utah 17, then left again on Utah 9. We once more passed through the now familiar villages of Toquerville, La Verkin, Hurricane (that’s Hurricun to you newcomers), Virgin, Rockville, and Springdale, the last the gateway to Zion National Park. We checked into the (cheap) Canyon Ranch Motel, unpacked the car, and moved into our room. We set up our hot plate and got ready for dinner.