“Zion”: A fortress. An ideal religious community. A sanctuary. A perfect place.  Zion National Park is in that part of Utah known as “Dixie.” Brigham Young, looking both to consolidate his earthly empire and to begin cotton production, partly to make up for the lack of cotton fabric brought about by the Civil War, sent colonists into what is now the southwestern corner of the state. Later, Young build a summer home in the region’s largest settlement, St. George, which today is a city of nearly 80,000 people, its rapidly growing population driven in part by warm weather and proximity to Las Vegas.

Like most of southern Utah, the landscape in Dixie is dramatic, nowhere more so than in Zion National Park. The great Zion Canyon dominates the park, carved deep into the sandstone by the Virgin River, which flows through the canyon at a very steep decline. The canyon itself is surrounded by sandstone cliffs that reach a height of more than 2,000 feet, making them the highest such cliffs in the world.

The first Anglo to enter the canyon was Mormon settler Nephi Johnson. [Nephi is pronounced Neph-eye, and rhymes with Moroni, the angel who gave the golden tablets containing the Book of Mormon to Joseph Smith and whose golden image adorns the top of the Mormon Temple in Salt Lake City. Nephi is an important character in the Book of Mormon. According to the scriptures, he and his brother Laman came from Israel to the Americas, where they had a kind of Abel and Cain relationship. The followers and descendants of the bad brother, Laman, are called Lamanites. Mormons claimed that the Indians with whom they soon came into contact as they migrated west were Lamanites, no doubt justifying their treatment of native peoples, which included forced separation of Indian children from their parents and adoption and conversion by Mormon families.] Johnson’s Indian guide refused to enter what his people considered a sacred place, but Johnson traveled from the mouth of the canyon perhaps to The Narrows, where the space between the towering cliffs narrows dramatically, at point so small that a hiker can touch both walls with extended arms.

We have hiked a mile or so up The Narrows, but you can go many miles further, wading (and sometimes swimming) in the river and walking along the sandy banks. Our son broke his ankle on just such a long hike and had to limp down the stream for three miles with his companions to get help.

Before we had ever visited Zion, we met a couple in Canyonlands National Park near Moab, Utah. We told them we would be driving to Zion, and they began to rave about the park’s beauty. The woman told us that Zion was lush with greenery. After they left, I scoffed at this. How could a park in the Utah desert be lush? I should have known better. A river cuts through the canyon, and rain that falls on the cliffs seeps down through the sandstone. When the water comes up against harder lower rocks, it detours to the cliff faces and drips down the walls (this process takes many years, and it might be a thousand years before a drop of rain falling today joins the drip down the walls), supplying enough water for abundant plant life, both on the ground and on the cliff faces. Living walls of ferns and bushes grow on the walls and in every nook and cranny that gets water. Springs and the water from the river do indeed make the banks lush, an oasis of shady coolness even in summer when it is a hundred degrees.

We considered a number of hikes to take our first full day in the park. One possibility was the harrowing trek up Angel’s Landing. This isn’t a long hike, but it is strenuous. After crossing a bridge over the glass-clear waters of the Virgin River and beginning to climb, you ascend a steep set of twenty-one tight switchbacks known as Walter’s Wiggles. Not far beyond these, there is a flat space where you can rest and contemplate the rest of the hike, which takes you up a very skinny rock formation. At some point, the trail is only a few feet wide, and there are sheer drops of a thousand feet or more on each side. The park engineers have bolted strong chains into the rocks so that hikers can hang on for dear life as they slowly make their way to the top. Our friend Dwight hiked to the summit before there were chains, something we cannot imagine doing. The one time we took this hike, we first rode the shuttle bus to the handsome Zion Lodge to meet our son, who was then working as a cook in the Lodge Kitchen. We asked the driver if anyone had ever fallen over a ledge on the Angel’s Landing trail. Without missing a beat, she said that just that year a teenager had fallen to his death. This year a woman died when she stepped back to take a family photograph.

decided on a less ambitious hike, to Hidden Canyon. After a climb of about a mile and a half, again with the aid of chains to secure hikers against a certain-death fall, we reached the mouth of a well-camouflaged “hanging” canyon, one that dead-ends without ascending or descending, just hanging in the air. You can walk into the canyon as far as you are able. The first part is level, and you soon come upon a rock arch, almost hidden by the canyon walls behind it. Small trees and plants abound in the sandy soil, and if the weather is cool, you relish the narrow bands of sunlight that strike the canyon floor when it widens enough and the sun is at the right angle. As you progress through the canyon, you come up against several rock barriers. Each is more daunting than the one before. This time we made it over the first two, worrying more about climbing down the slick rocks when we hiked back out. The third nearly stopped us. A gigantic wall of rock blocked the middle of the canyon. To the right there was a ledge too high for us to climb onto and probably too sloped and slippery to walk along if we had been able to hoist ourselves up on it. To the left, a rocky and very steep path rose next to the rock wall. We took this route and made it to its highest point. It looked like we could have descended back to the canyon floor and hiked on. However, we didn’t know where the canyon ended, and we were getting tired. So, we hiked back out. The footing got tricky in a few spots, but we made it. Later we looked at some relief maps and hiking guides and concluded that we were just a short distance from the end of the canyon. Maybe we should have labored on! Still, we made if further than we ever had. I thought it was a grand achievement. 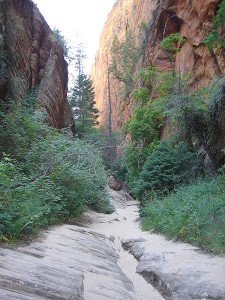 There is something especially tranquil about Zion Canyon. On our last day, we hiked down a trail overlooking the river and the canyon floor. The cottonwood trees shimmered in the warm sun, their leaves lemon-lime and burnished gold. It seemed sacrilegious to leave, to enter once again the world of Mammon. Even the sleepy little village of Springdale is succumbing more and more to the dictates of commerce. Older motels are being torn down, and more expensive ones will surely replace them. Fancy shops and galleries are springing up, and what were once open spaces will soon give way to housing developments with pretentious names. We fear that one fine day, the Canyon Ranch Motel won’t be there when we come to town.

We re-packed the van and dropped off the keys at the motel office. We drove toward Zion’s East Entrance, through the Mt. Carmel tunnel, and parked. We walked along the short Overlook Trail and took one last look at Zion. Then we resumed our journey, heading toward Bryce Canyon and Capitol Reef National Parks.