We drove back to Boulder from Moab on Thanskgiving. It already feels like we have been back for a month. Boulder has its good points, but when it is cold and the view outside our window is the same one we have been looking at for a year now, well, we get bored beyond words. People are out shopping for things they don’t much need and dining in second-rate restaurants that everyone raves about, going to stupid jobs, panhandling for change to buy drink and drugs. The whole thing seems so absurd. When you add to this the idiotic speech Obama gave at West Point, trying to justify murder and mayhem in Afghanistan as necessary for the good of the country, while workers can’t find employment, while the bogus healthcare bill is hailed as a legislative revolution, while the talking heads on television babble on and on, while the grossest corruption is now the coin of the realm, well Jesus H. Christ, let me out of here!

Back to Moab maybe. There is a special place south of town. Make a right turn onto Angel Rock Road and drive past the shabby houses and trailers, with yards filled with junk and a few horses, to the Hidden Valley trail head. Rising above you is a steep and rocky cliff; it is impossible to spot the trail, so jumbled are the rocks. But the hike isn’t as hard as it looks; there are numerous switchbacks that lessen the verticality of the ascent. After a bit more than a half mile and some huffing and puffing, you will find yourself in an amazing valley. Stark and sheer cliffs are on your left, and on your right the valley gives way to more gradually graded rock formations. The ancient ones came here long ago, maybe coming down from the La Sal Mountains and finding there way to the Colorado River. There must have been game in the valley and some protection from the elements, and perhaps hostile humans too. A mile and a half brings you to the end of the valley and the beginning of a slick rock descent to the river, or just as many treks over the rocks as you care to take. Unless you know what you are doing, it is easy to get lost in this terrain, so we stick to the jeep trail or walk with an eye toward some easily recognized landmark. This year the trail appeared slightly more passable than in the past. Moab is jeep central, and it may be that some group of high-clearance, four-wheel drive enthusiasts did some repair work, perhaps for a road race or excursion of some sort. It would be exciting to ride a jeep over the slick rocks the whole way to the mighty Colorado.

We hiked a mile or so down the road, following the cairns that were set up to guide the jeeps. On the way back, we started up a road to a cliff that overlooks Moab. Karen looked at some cliffs off to our left and exclaimed that she thought she could see petroglyphs (petroglyphys are pictures pecked into the rock; pictographs are painted onto the surface). She looked through our binoculars and was sure of it. We decided to hike to see them, over the rocks, trying as best we could not to step on the cryptobiotic soil, which is the life blood of the desert plant life. This soil looks like a crust on the ground surface; it is alive and builds up over many years, providing nutrients for more complex organisms. If you step on it, you kill it. We once took a guided hike with a park ranger in the Fiery Furnace in Arches National Park. Ranger Clay sternly impressed upon us our duty not to step on the cryptobiotic soil. Had he been able to do so, he probably would have strangled a Dutch tourist who jumped down from a rock right onto a large patch of this living earth.

We managed to get across to the cliff face without doing too much damage, finding our way down and up one ravine and around another, ultimately climbing along the base of the cliff and scrambling up onto a ledge. We were rewarded with a fine collection of rock art: abstract spirals, bighorn sheep, elk, groups of human figures holding hands, snakes, feet, and the iconic 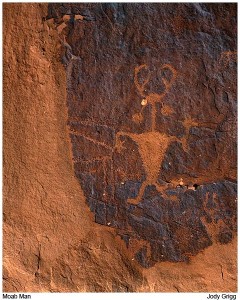 Moab Man. We contemplated this rock art for awhile, imagining the people who made it and wondering what the figures meant and why they had made them here. There is something wondrous about petroglyphs and pictographs. They speak to us somehow and make us feel kindred to men and women who, in most respects, were very probably nothing like us at all.

Energized by our find, we trooped back to the main trail and made our way back to Hidden Valley. We stopped to climb another cliff to look at petroglyphs we had seen the year before with one of our sons. We met a man who was making sketches of the rock art and taking notes. He seemed at first not to want to talk, but when he learned that we were interested in the petroglyphys, he opened up, telling us something of what he had learned about them. He recommended a book, Sacred Images, 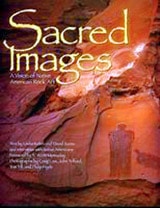 which I later bought (at the excellent Back of Beyond Books) Karen for her birthday. He also drew us a map of the location of another group of petroglyphs, in Mill Creek Canyon. We found this art the next day. Then Karen uncovered another cache along Kane Creek road. We made several stops. The first site, at Moonflower Canyon, has been defaced by stupid people, but there are still some good examples of prehistoric art. And there is a rock chimney, the insides of which have been split in such a way that, with the help of the primitive ladder made of thick tree branches, which you can still see, a person could climb to the flat overlook above.

A short way past this first site, we saw modern “cave” houses, one with a garage, built into the rocks. Around Moab, people seem to take any available space and construct some sort of residence on it. The paved road eventually gives way to dirt and begins to climb. These roads don’t have guardrails and the drop offs are frightening. We couldn’t find what we were looking for and when we came to a steep downgrade, we decided to turn around before we got into trouble. A mile or so later, we spotted an enormous square boulder and sure enough, this is what we were trying to find. There are petroglyphs on all four sides of the boulder. And on one panel, there is an incredible birthing scene chiseled into the rock. The baby is coming out feet first. 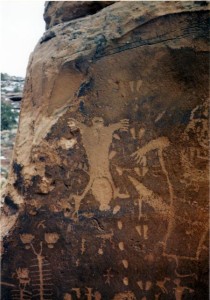 Nothing quite as exciting now that we are back in Boulder.  Life goes on. Sort of.