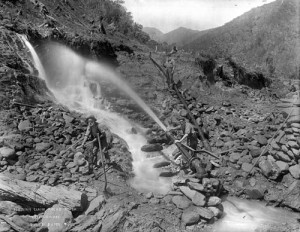 As I was channel surfing a few months ago, I stopped to watch a new Discovery Channel reality show called Gold Rush. Since then I have seen every episode. The show is now in its second season, and it is one of this network’s most popular programs.

“Reality” is a misnomer since Gold Rush is both scripted and directed. The story line is straightforward. Several men from Oregon, suffering the impact of the Great Recession, pool their money and, with as much mining equipment as they can afford, head for the wilds of Alaska to prospect for gold. They lease a claim from an old miner, and set up shop next to a legendary prospector named John Schnabel, who has successfully found gold for decades and is still going strong at the age of ninety-one. Various subplots develop during the first season, which ends with the Oregonians poised for a big strike but forced by the oncoming winter weather to close shop and wait for next year. In the second season, they lose their lease to a man named “Dakota Fred,” who had been hired by the landowner during the first season to keep an eye on the original crew, who had a penchant for serious miscalculations and mistakes. The new season revolves around the conflict between the Oregon men, who have bought a new lease in the Klondike (several hundred miles from the first season site) and Dakota Fred, and the attempt by John Schnabel’s teenage grandson, Parker Schnabel, to take over the management of his grandfather’s mine.

As drama, Gold Rush is ridiculously bad. You keep asking yourself obvious questions. How did a group of men portrayed as economically hard-pressed and remarkably inept come up with the hundreds of thousands of dollars to buy or rent all that equipment, repair it when it so frequently broke, and purchase the fuel to operate it? How did they raise this money again, to buy better equipment, before the second season commenced? How did crew leader, Todd Hoffman, forget to do the paperwork necessary to maintain that first lease and thereby lose it to Dakota Fred? If Hoffman was able to secure funds for year two by selling part of his family’s small airport, why would we believe that he was down and out in the first place? Why would Hoffman’s partners believe that there was gold under the ground they had leased just because Hoffman’s father, who had mined in Alaska before, said he had a gut feeling that it was there? And so on.  I’ve had to suspend less belief watching Family Guy.

But if the drama is weak, the values that the show upholds are awful. They reflect so much of what is wrong with the United States. First, there are the regular references to “the American Dream.” The men say that in the United States, a person can, if willing to take risks and persevere, strike it rich. This is given its typical political twist when combined with the belief that this is what made America exceptional. You can’t do such things in other, lesser countries. The Hoffman team portrays itself as a throwback to an earlier time when the United States was great, unlike the present when the nation is mired in crisis. Not for them the reliance of so many of their fellow citizens on government handouts. Nor the financial charlatan’s money-making magic. No, they are going to take that most elemental form of money, gold, right out of the earth, with their hands and machines. And they are doing this for family, God, and country. They regularly refer to their families as the reason they are in Alaska. They often form a circle and pray for success. They say that the whole country is rooting for them to succeed. Their examples will encourage others to chase the American Dream, and maybe the nation will right itself and be on top once again.

Second, the untrammeled pursuit of money is seen as an obviously good and natural thing, and the effort to get it is what matters and not the collateral damage that this might cause. The members of the Hoffman crew tell some hard luck stories. Their homes are about to be foreclosed. They can’t pay their bills. One man has such serious spine problems that he has to take heavy doses of morphine. If they don’t find gold, they will be ruined. If they find it, their problems will be over. Perhaps they should have read B. Traven’s novel, The Treasure of the Sierra Madre, or at least watched the movie, before beginning their quest. If they had, they’d know that the search for gold can corrode the seekers’ humanity, ultimately breaking down the social bonds of friendship and common purpose.

Todd Hoffman bickers with his father, and near mutinies against the two of them by the others seem always to loom. Dakota Fred and his son argue bitterly, and Parker Schnabel rudely attacks his grandfather. Everyone is separated from his wife and children, and it is hard to imagine that this isn’t taking a toll; we know that tough economic times warp family relationships. If these prospectors do find gold, they will squabble over how it is shared. Then, if they really strike it rich, isn’t it likely that they will just mindlessly spend it. The media are replete with reports of lottery winners squandering money. If these men are in their ordinary lives at all like they are presented on the show, money won’t make them kind, sympathetic, and happy human beings. They won’t make the world a better place.

There is another kind of collateral damage that is as startling to see as it is ignored on the show. Gold mining is ruinous to the environment, and what these men do to their surroundings is abominable. During the first season, some were foolish enough to bring spouses and children with them. The heavy equipment, the mud, the large water-filled ditches, and the general filth soon sent the families packing, but not before the husbands kill a black bear that came calling. According to Alaska’s Department of Natural Resources, an animal had entered the claim site, most likely after food that had been carelessly left out. Some time after this, a bear that was neither on the site nor a threat to humans was killed. Hoffman senior said afterward that he wasn’t a fan of bear meat, but this one was fantastic. One of nature’s most magnificent creatures is killed so that a bunch of fools can look for gold.

The dead bear was a minor environmental calamity compared to the natural habitat in which the fauna and flora live. Millions of gallons of water are drawn from streams and contaminated as they are used to separate the heavy gold from the rocks and dirt in which it is embedded. The rocks and dirt themselves are ripped out of the earth by machines after crude roads have been built and the surface trees and soil have been bulldozed. The debris is hauled away to create enormous mountains of waste, similar to the “boney piles” or “rock dumps” once so common in coal mining villages. In one particularly grotesque episode, the Hoffmans think they have discovered some virgin land on their Klondike claim, that is, ground that has not been previously mined. They believe this because there are large trees growing, and they (erroneously) assume that their size indicates an age older than when gold mining last occurred in the area. Elated, they break out the dozers and rip up the permafrost. This creates a muddy mess, which is simply dumped wherever convenient. It turns out that the land had already been mined, so all they did was ruin it once again. But not to worry; they had their claim tested with sample bores and then wreaked havoc on some more of their acreage. What is left when whatever gold there is has been recovered is a despoiled environment that will not soon recover, if ever.

The Alaskan landscape, like parts of the western mainland of the United States, is severely marred by mining. The Hoffmans decided to have the test bores done after Todd visited a large corporate mine, where the Dutch manager tells him that ground must be tested for gold deposits before clearing it. While Todd and the manager are talking, the camera pans the mining operation. A large hydraulic hose, which can develop enormous pressure, is being used to literally crumble an entire hillside, washing down a mountain of soil, which is then run through complicated sluice boxes until gold settles at the bottom. It was a scene right out of the infamous “Malakoff Diggins” near Grass Valley, California. There, water cannons called “monitors” destroyed the hills, and the waste water flowed into the Yuba River. This flooded towns downstream, including Sacramento, and hundreds of tons of silt entered San Francisco Bay. So severe was the damage that hydraulic mining was outlawed in the state, in 1884! Alaska, it appears, is behind the times. In fact, the show’s producers claim that the Gold Rush miners are in compliance with all Alaska laws, which only shows how pathetic are the environmental statutes of the United States’s last frontier. In any event, the Hoffman crew, Dakota Fred, and the Schnabels seem oblivious to what they are doing.

Capitalism relentlessly breeds antisocial behavior. It breaks apart all egalitarian and communal relationships—those that would be best able to help each of us cope with both individual and societal disasters. We are forced instead into “command and obey” relationships (in school, at work, vis-a-vis the government), those in which most of us are compelled to do things we might not choose to do if we could make free choices. We “connect” to one another as competitors, in a war of all against all. Eat or be eaten. Other people and the natural world come to be seen as objects to be exploited. We might like to act in a more humane manner, but we cannot.

All of this alienates us from both our fellow human beings and our environment. We are left to our own devices, to survive the competitive rat race as best we can. Those with power then promote the idea, in the workplaces they own and in the culture they dominate, that such an individual existence is good; it will create the best of all possible worlds. If we come to internalize this view, what is left for us except to do what those with power say we should do? We have, perhaps, been seeing recently, in the Occupy Wall Street uprising, the beginning of a revolt against the sad excuse for human life that modern capitalist society has forced upon us. But we have a long way to go. Gold Rush resonates with viewers because it validates what we have been taught to believe. Hard times may be here, but we are to blame. And it is up to each of us to find a way out of whatever trouble we find ourselves facing. If we act aggressively, take risks, and never give up, we will do well, and in the end, the crisis will be a blessing. We will be better off than ever and ready to participate on a grander level than ever before in the buying of goods and services that defines us as successful people. We might even strike it rich, and then easy street will be our new address. If others suffer as a consequence of what we do, if we kill a few animals and a few thousand acres of land, well, such is life. If we didn’t do these things, others surely would.

Gas "Frackers" Come to a…

"Killing People in Apollo": An…

The National Parks Were Made…