Home /A Good Job Is Hard to Find

In 2010, about 139 million people, on average, were employed in the United States.  What kind of work did they do? Here is an interesting table constructed by the Bureau of Labor Statistics: 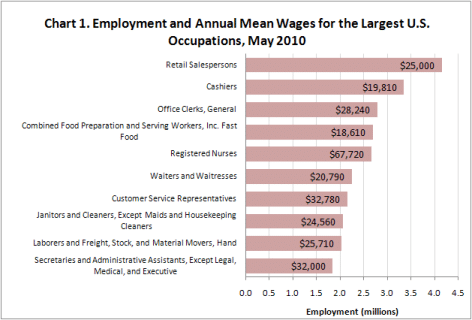 These occupations comprise one of  every five jobs in the nation. Notice that the only one with a decent average wage is nursing. Given that low pay and less than desirable working conditions usually go together, it is safe to say that the rest of these jobs are in most respects bad ones. Even nursing is mind- and body-punishing employment, so much so that nurses have been leaving their profession in droves, the relatively high earnings notwithstanding.

Critics might say that yes, these are undesirable jobs, but things are going to change. They argue that we are going to need millions of highly trained and educated professionals, because of the rapid development of sophisticated information and other technologies. Now, if this were so, we should see occupation projections to match. The Bureau of Labor Statistics makes such projections. Here are those for 2008-2018 for the jobs predicted to generate the most additional employment:

The labor market of the near future looks much like that of the recent past, with a high proportion of new jobs paying low wages and requiring no special schooling or skill. Of the 5,816,000 projected new jobs, only a little more than 20 percent paid more than $50,000 in 2008, and nearly half of these are the aforementioned registered nurses.  By contrast, some 56 percent paid less than $30,000, which some economists would consider a poverty income.

If we extend our view to the world, we find that the overwhelming majority of jobs pay a subsistence wage or less, with workers, including millions of children, laboring under unimaginably poor conditions and forced to do numbingly repetitive tasks for a dozen hours a day or more. There are no indications that this will change anytime soon.

We can represent the jobs structure by a triangle, with the mass of jobs at the base, poorly paid, requiring limited advanced education or training, and demanding little of the capacity for conceptualization and planning inherent in almost every human being. Jobs get better as we move toward the top of the triangle, but there are fewer of them.

There is a compelling reason why we have such a job structure: we live in a capitalist world. Capitalists exist to make money. They do this by hiring workers and then compelling them to labor for as long and intensively as possible, so that they produce revenue as much greater than their wages as feasible. To do this effectively and remain in business in the face of brutal competition, employers must try to exert maximum control over their workers’ labor, that is, convert as much of their hirelings’ capacity to labor into actual work as they can. Employers must control every aspect of how work is organized and performed. If they do not, their workers might be able to disrupt production enough to lower profits or even reduce them to zero or make them negative.

What kind of workers might be best able to impede the flow of profits? Isn’t it obvious that these would be those with knowledge the management doesn’t have—those with specialized skills, those who grasp the totality of the firm’s production processes, those who can conceptualize the work they perform and act upon their understanding? In a word, those employees who are missing in action in the data cited above. This means that unless the job structure radically changes, a future of good jobs is unlikely.

Education is often put forward as the most promising candidate for changing the job structure. More and better schooling could, it is said, put every working person in the world on the road to prosperity. Let us look at this proposition.

It is difficult to see how education could make, say, a hotel room attendant’s job a better one. If every attendant in the world got a college degree, what would make hotel managers pay more money or make conditions better for the same work as before they all got diplomas? Now it might be the case that at least some of the attendants could now get better jobs, but then the managers would fill vacancies with less educated people. Worldwide the pool of available laborers for relatively unskilled jobs is extraordinarily large, so hotels are not likely to ever face a shortage large enough that they would have to pay significantly higher wages and improve conditions. But even if they did, this would have nothing to do with education.

What if every worker in the world obtained more schooling? Imagine that there was not a single person anywhere who did not possess a first-rate college education, trained just like those who now attend elite colleges and universities and usually get the best employment. Would this change the job structure? Would it resemble an upside down triangle, with a few bad jobs at the bottom and hundreds of millions of great ones at the top? The only way this could happen would be, first, if there was full employment and one set of educated workers couldn’t undercut another; and second, if the now educated workers all banded together and refused to work at any job that didn’t pay a high wage and provide excellent conditions. Oh, but wait a minute, that could happen now.  It’s called forming labor unions and building a labor movement. Again, this has nothing to do with education.

Jobs are what they are because our economic system is what it is. It is the system that will have to change, not the amount of schooling each of us obtains. And this system won’t change unless there is massive, radical, global class warfare waged by workers on all fronts (on the job, politically, culturally) and in all places. If this doesn’t happen, the employment prospects for most people worldwide will be bleak. Low wages, longer hours, harder labor, and perpetual insecurity: these are what await us.

[Note: for a lucid account of the myth that education is the key to ending inequality and poverty, see the fine new book by John Marsh— Class Dismissed: Why We Cannot Teach or Learn Our Way Out of Inequality, published recently by Monthly Review Press.]