Home /Choosing an Occupation: The “Science” of Economics 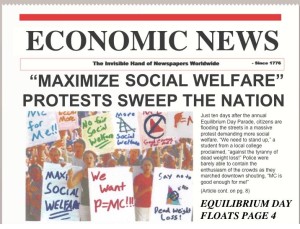 The name, “Nobel Memorial Prize in Economic Science,” tells us that those who give the prize believe that economics is a science. This is certainly what my professors thought when I was a student. One argued that every good economist is a good physicist. There was even a joke that an exceptional economist who dies is reincarnated as a physicist, while a mediocre one comes back as a sociologist.

Mainstream, or neoclassical, economics, whose practitioners have won almost all of the Nobels, begins with a fundamental idea: the economy is best conceived as a set of markets in which buyers and sellers act solely out of self-interest, each trying to maximize his or her well-being. In the labor market, for example, employers are assumed to be profit maximizers, while employees are presumed to allocate their time between work and “leisure” so that they gain as much “utility” or “satisfaction” as possible. Each actor in the marketplace faces constraints of one kind or another, and each takes these constraints as a given, making choices within them so as to make their total profits or “utility” as high as possible.

We can apply this simple notion to many situations. Here is one. Judge for yourself if you think this is scientific reasoning.

Let us imagine a man making a certain type of labor market decision. Assume, as does the neoclassical economic scientist, that he has complete knowledge of the wages and benefits associated with every occupation he is considering entering. He also knows what it will cost him in terms of schooling and training to be eligible for employment in each occupation, as well as the income he will have to forego by not working while he is getting the necessary schooling and training. Any particular disamenities of an occupation, such as physical danger, are also known as are their costs. Given these considerations, what will he do? He will assess the costs and benefits of each occupation and choose the one for which the difference between the two is the largest. Implicit in this scenario is a wage for each occupation that at least covers the cost of entering it. Competition in the marketplace will, in fact, make the wage just equal to the entry cost. An occupation with a wage higher than the entry cost will attract new applicants; this will put downward pressure on the wage and upward pressure on the costs (as more people demand schooling and training); and eventually, the above average wage-cost difference will disappear.

The implication of this theory is not intuitively plausible. It is that, while some workers earn higher wages than others, higher wages must reflect higher entry costs. In a sense, then, a doctor is not really better off than a motel room cleaner; in terms of wages minus costs, they are in exactly the same position. Voilà! At least as far as labor income is concerned, there can be no inequality.