Home /Profits May Rise, Profits May Fall, the Capitalist System Doesn’t Care at All 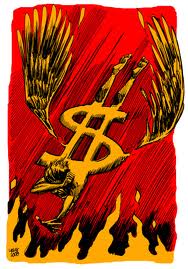 A left-wing economist with whom I have a marginal acquaintance sent me an email a few days ago. He was angry that I had accused him of being a “true believer.” This was in reference to what Karl Marx termed the “tendency of the rate of profit to fall.” Put simply, my accuser is certain Marx demonstrated that as capitalism develops and businesses succeed in expanding their production, they discover, against their will, a falling rate of profit on their invested capital. The resulting decline in profitability is the cause of economic crises, as businesses refuse to make investments at the lower rate, resulting in a reduction in their workforces, reduced consumer spending, and so forth. The “tendency of the rate of profit to fall,” is, according to its adherents, the fundamental “law” of capitalism, the central star around which everything else revolves. I suggested otherwise, and, as many radicals can attest, this always raises the ire of those who are convinced the “law” is true.

There are good reasons to believe that there is no such “law,” that Marx’s logic in discovering it is flawed. It has even been plausibly argued that Marx, himself, realized the fault in his reasoning and abandoned the “law.”  But let us suppose that it is true. What then? Will the inevitable economic crises bring forth rebellion and revolution? History doesn’t give us much reason to be optimistic. Will the crises deepen, each one worse than its predecessor, ultimately making life so unbearable that the exploited masses rise up in fury, destroy capitalism, and set about building a socialist world? Again, reality provides little comfort to those who think that this has been the case or will be someday. Today, it seems more sensible to think that the expansion of capitalism into every part of the globe and every aspect of our lives will sooner rather than later generate a catastrophic environmental meltdown. This is the crisis that is most likely to happen, profit rates notwithstanding. Whether it will be the catalyst for revolution is anyone’s guess.

Those who champion the “law” take it as an empirically testable proposition and have devoted extensive efforts to demonstrating that profit rates have actually fallen. Against investigators who have not uncovered diminishing profit rates, the “law’s” devotees trot out two arguments. First, they point to certain countervailing tendencies that can delay the decline in profit rates, such as foreign investment. Or, second, they say that their opponents have used incorrect definitions of the relevant variables.  If these defenses of the law read like those made by some neoclassical economists to show that the economy would have prospered but for some sort of government-induced distortion of the marketplace, this is because they have a striking similarity. If I say that the government has been doing all it can to make the market king and still we have problems, the economist says that the state has not done enough. If I say that the evidence suggests that raising the minimum wage does not appear to cause a loss of employment, the economist says that I haven’t defined my terms correctly or specified my model properly, haven’t perhaps made certain that the right “other things” have been held “equal.”

The person who sent me the email had written a critique of a Marx scholar and economist who attempted to show that, from a theoretical standpoint, there is no tendency of the rate of profit to fall. The scholar then responded to his critique, and that of several others. Then those who had offered criticisms replied to this response. If the scholar were to respond again, there would surely be another round of “debate.” In fact, there would be as many rounds as the original writer had the stomach to endure. I don’t think he will embark upon a second set of skirmishes. He knows wasted time when he confronts it. He understands that he is dealing with “true believers” and that no amount of logic, no piling up of evidence, will ever convince his adversaries. I once said about neoclassical economics: “The main trick used by professors of economics is to draw their pupils into a make-believe world and then convince them that [this] is a good approximation to the real world, enough so that the [reality] in which we live can be studied effectively by analyzing the fantasy world.”   Marx analyzed capitalism in its “ideal average,” at a high level of abstraction. This “ideal average” can serve as a guide to examining the societies in which we live—the ones in which, as a friend of mine said,  historical contingencies and political factors operate— but the two are not the same, something the disciples of the “tendency of the rate of profit to fall” school do not seem to grasp.

I therefore do not retract my “true believer” comment. However, my correspondent went on to say that I had impugned his “many years of serious Marxian scholarship.” Whether devoting “many years” to proving that there is a tendency of the rate of profit to fall represents serious scholarship, Marxian or otherwise, is an open question. Thomas Aquinas and many other Church fathers spent a good deal of time and effort proving that there is a god. They were serious, and they were scholars, adepts in Greek and Latin no less. Yet might not a rational person say that their efforts were a monumental waste of time, because they were trying to prove something that in the nature of things cannot be proved? Perhaps God has to be accepted on faith, just like the theory of the tendency of the rate of profit to fall.

What exasperates me more and more is the certainty with which so many people pontificate. As I get older, I think every day that, relatively speaking, we know less and less. We don’t know, for example, what existed before the “Big Bang.” We don’t know why we have gotten so much fatter as a species. We don’t know what causes many diseases. We can’t cure the common cold. We don’t know why some people get cancer and others do not.  We don’t know why the native people of the southwest disappeared during the fourteenth century. We don’t even know why we think the thoughts we do. So, how is it that some are sure they know the root cause of economic crises, that we cannot grasp a social system as complex as capitalism unless we understand that there is a tendency of the rate of profit to fall?

Millions of words have been written in defense of Marx’s “law.” Given its alleged importance, you would think that all of this effort, this “serious Marxian scholarship,” would have borne fruit, hastening the demise of capitalism or at least alleviating its worst consequences: poverty, unemployment, demeaning and alienating jobs, poor health, environmental depredations, and the like. Unfortunately, there is no such fruit. The almost certain truth is that all of the words written, all of the conference presentations made, all of the verbal sparring, have yielded nothing. Capitalism shrugs off such stupidity. This awful system may end someday, but “serious Marxian scholarship” will have nothing to do with it.

TAGS: MarxismMichael Heinrichtendency of the rate of profit to fall