Home /If I Were a Rich Man 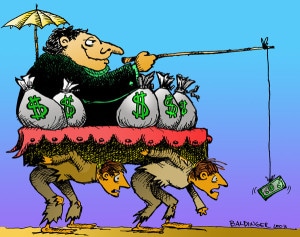 When the great populist Huey Long was campaigning for governor of Louisiana, he wrote some clever slogans and songs. One song began: “Every man a king, for you can be a millionaire.” Back then, in the late 1920s and early 1930s, the word “millionaire” meant that a person was rich beyond the dreams of mere mortals. Long used it to suggest that everyone could and should be rich, that there was plenty to go around in such a wealthy country. He favored equality and democracy. In a slogan, he said, “Every man a king, but no one wears a crown.”

Huey Long had faults, but he wasn’t in favor of the dog-eat-dog world that is the contemporary United States. Today, the people who say “you can be a millionaire” are the hucksters on television infomercials, hyping their “get rich” seminars, or the talking heads on Fox who declaim that we can all be rich (like they are) if we only work hard enough and have the proper amount of perseverance (like they did). If you want it bad enough, it will be yours, they tell us.

The United States is chock full of rich folks. We admire them immensely and wish we were like them. However, I think sometimes that we are still thinking in terms of Huey Long’s use of the word “millionaire.” We haven’t realized that a million dollars isn’t what it used to be. Nowadays, we have billionaires, quite a few of them. The infamous “Forbes 400,” a list of the 400 richest persons in the United States, had a minimum qualifying net wealth (assets minus liabilities) of $950, 000, 000 in 2009, which means that there were nearly 400 billionaires in the United States. The average net worth of the “400” was $3.2 billion and the maximum was $50 billion.

Net wealth is what a person is worth, in terms of money, at a particular point in time (in the United States, at least as far as the dominant culture is concerned, I probably could have skipped the phrase, “in terms of money”). Income, on the other hand, is money (or sometimes goods and services such as room and board, food stamps, use of a corporate jet, energy subsidies, and the like) that comes our way over some period of time. Common types of income are wages, rents, interest, dividends, profits of unincorporated businesses, social security, and capital gains. The time period we usually consider is one year. So I say that I was paid a certain number of dollars for my work as an editor in 2011. Or my social security income was so many dollars last year. My total 2011 income is the sum of all the money I took in that year.

A billion dollars in wealth is one thing.  A billion dollars in income is almost inconceivable. Yet, in recent years, some persons have made billion dollar incomes. It is possible that a few could get a billion or more just from interest on their wealth. Bill Gates once had an estimated fortune of close to one hundred billion dollars. Suppose that he was able to get a rate of return on the assets represented by this wealth of just 2 percent.  This would yield a yearly income of two billion dollars.

While using google to find information for this post, I came upon a New York Times article about the pay of hedge fund managers in 2009. The title is “Pay of Hedge Fund Managers Roared Back Last Year.” The Great Recession that began in December 2007 put a crimp in the style of the super rich as stock prices fell and the value of all the exotic financial instruments that these same people bought and sold imploded. But thanks in large part to the generosity of the Obama administration, those at the pinnacle of the income pyramid rebounded and are nearly as rich as ever. At the top of the hedge fund entrepreneurs was David Tepper of Pittsburgh. He used money in his hedge fund to make a large bet that the banks would be bailed out by the government and be saved from insolvency. His reward was a payment from his hedge fund to himself—managers of these funds typically receive a management fee plus a share of any gain in the fund’s assets—of four billion dollars in 2009. Noted financier and, according to Fox News, raving communist, George Soros was second to Tepper, with an income of $3.2 billion. Remember, this is income, not wealth. Tepper and Soros made these outsized sums in one year.

Naturally, the super rich do not spend all their money. They save and use the saving to buy society’s productive resources—the capital that the rest of us rely on, by selling our ability to work to its owners. Then, with the power ownership gives them, they take from us the labor time that generates business profit. The profit not only increases their incomes and wealth, it also secures the power that allows them to do this in the first place. Money and its corresponding economic power support enormous and complex structures of political, social, and cultural power that maintain the entire exploitative system.

At the other end of the tremendous economic divide that characterizes the United States are the super poor. In 2010, more than 7,000,000 people had incomes less than 50 percent of the official poverty level of income, an amount equal to $11,245. It would take 355,713 years of receiving this income to equal Tepper’s four billion. To ask how much power those at the bottom have is to answer the question.

Any thoughtful person must know that the inequality that marks the United States stacks the deck in favor of those who have the most income and wealth. But the key to ending this inequality is not redistributing some of this from the rich to the poor. It is instead bringing to an end the entire power structure that makes capitalism tick and whose existence guarantees the continued subservience of most people to the wishes of the few. Because in capitalism, it is the poverty of the majority (of workers) that gives rise to the riches of the minority (of capitalists), and the reverse is just as true.