Home /OWS and the Importance of Political Slogans 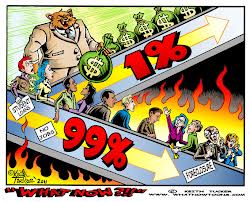 Radical political movements always employ slogans that encapsulate in a few powerful words the aspirations of those fighting for a new world. The French revolutionaries fought under the banner, “Liberty, Equality, Fraternity,” words that still resonate with radicals. The first words of the U.S. Constitution—“We the People”—have quickened the hearts of generations of populist activists. Emiliano Zapata’s soldiers longed for “Tierra y Libertad,”and the peasant armies of Mao Tse Tung went to war for “Land to the Tiller.”

Every slogan has a context, circumstances that give rise to the words and make them effective. For example, when the Chinese communists were waging their long struggle against the army of Chiang Kai-shek, they relied upon mass support from peasants, who formed the base of the Red Army. China was still a largely feudal society, and peasants were brutally exploited by rich landlords. Those who worked the land wanted it, and the communists promised to give it to them. “Land to the Tillers” expressed this desire and the Party’s commitment to it. Even today, after decades of capitalist restoration, China’s rural people still have land rights won in revolutionary struggle.

The catchphrases of political upheaval are always somewhat vague. In China, there were the farmers who tilled the soil and the landlords who owned it. However, both classes included people of varying economic means. There were small, medium, and large landholders. Not all peasants lived in squalor and destitution. Yet, all landlords tended to be lumped together, and all of their land was fair game for expropriation.

The imprecise nature of political slogans is a virtue. Actual political programs do not derive from words alone but from the balance of class forces that exist at a particular point in time. What slogans do is clarify the most basic political cleavages; they help people develop the mindset most suited to active participation in whatever struggles are at hand. In China, “land to the tiller” said that those who worked the land should possess it; those who owned but did not till, should not. That some both owned and tilled did not and should not have mattered. Such complexities would have to be dealt with later, when a new constellation of class forces had come into being.

The worldwide Occupy movement that erupted in Manhattan’s Zuccotti Park in September 2011 took as its watchwords, “We are the 99 %.” These words resonated with large masses of people as few others have in a long while. To understand why, it’s important to look at the context that generated the slogan.

“We are the 99%” derived its power from the devastation experienced by so many people during the Great Recession that erupted in December of 2007. The roots of this economic crisis go back to the mid-1970s, when an employer-led attack upon the working class began in response to lower corporate profit margins, the result of the declining global economic dominance of the United States. U.S. businesses faced strong economic competitors in Japan and Europe; the costs of the War in Vietnam were generating inflation and higher wages; and the brisk demand for U.S. capital goods diminished as the rest of the world completed post-Second World War reconstruction.

A weakened and class-collaborationist labor movement accommodated a rapid victory by capital, in what we typically call neoliberalism: a political project that included the deregulation of finance, privatization of public services, elimination and curtailment of social welfare programs, open attacks on unions, and routine violations of labor laws. These left working people with lower wages, less generous benefits, and growing insecurity.

The deregulation of capital markets gave rise to a host of new financial instruments, which grew by leaps and bounds as cash-strapped workers began to go into debt by borrowing against their houses and maxing out their credit cards. All of this generated growing income and wealth inequality; raised the financial sector to the commanding heights of the economy; and made production more vulnerable to financial crisis. The Great Recession was the product of the interaction of these three factors, and it generated a scale of worldwide misery not seen since the 1930s. While the downturn officially ended in June 2009, much of the working class is still mired in debt, employed in low wage/ no benefit jobs, either unemployed or fearful of job loss, and not very hopeful about the future.

While there were periodic protests against neoliberalism, it was not until the Great Recession that these broke out into mass struggle. This first emerged in the Arab Spring, but it soon spread to the entire world, from Spain to China and from Canada to Chile. In the United States, the Wisconsin Uprising of early 2011, led by public employees, inspired workers across the country, demonstrating that when pushed hard enough, in the right circumstances the working class would revolt and do things no one had imagined possible. Then, within a year of this, OWS erupted. Young people, led mainly by anarchists, took over Zuccotti Park in downtown Manhattan and waged protests against one of the greatest symbol of the 1%—Wall Street. When the police began to suppress the dissent, thousands of Occupy supporters descended upon the center of finance. Soon amazing displays of cooperative action and self-education deepened the struggle.

As the OWS phenomenon spread to cities and towns in the United States and then the world, the objects of the protestors’ scorn and anger increased geometrically—all those who oppressed the 99%: police, bankers, landlords, employers, universities, politicians, the media, and the military. In response, the powers that be began a coordinated campaign to slander and suppress what had the potential to disrupt both production and commerce. Ultimately, OWS encampments were closed, mainly by police force, but OWS-inspired struggles live on, and the memory of what happened is very much alive.

Critics of OWS and “We are the 99%” say that the slogan is inaccurate. I disagree. It is true that there are well-to-do people in the 99%, and there are many in the 1% who are not that rich. The cutoff yearly household income for the 1% varies, ranging from $380,000 using the Census definition of income to nearly double that using that of the Federal Reserve, which includes capital gains. In some parts of the country, $380,000 would qualify a household as rich, while in others it would not. The flip side of this is that there are many people in the 99% who are not poor. There is a big difference between an income of $379,000 (just below the Census 1% cutoff) and $20,000, the cutoff for the poorest 20 percent of households.

We could argue as well that using income to divide the 99% and the 1% is inaccurate because what matters most is wealth. Ownership of stocks, bonds, real estate, unincorporated businesses, and the like is much more skewed than income, and it is at the top of the wealth distribution that economic and political power reside. The richest 1% of households now own an astonishing 42.4 percent of net financial assets (these exclude homes and mortgage debt).

But these arguments about the accuracy of the slogan miss the point. “We are the 99%” suggests an “us versus them” politics that foreshadows the class perspective so badly needed in the United States. Those who feel unfairly maligned because, although their incomes are high, they are not rich are free to ally themselves with their poorer brethren. And those who are objectively poor are done no harm by being lumped together with those whose incomes are higher. What the slogan does is help nurture a worldview that understands that not only is inequality out of control but that the position of the 1% comes at the expense of the rest of us. To invert and paraphrase the words of Bartolomeo Vanzetti, “their triumph is our agony.” We can build upon this to create a politics that transcends the populism that passes for radicalism in the United States.

The issue here is not the literal meaning of the “1%,” but power. Whether we speak of income or wealth, power resides in the households of the 1%. They own our workplaces and control our labor. They construct nearly every aspect of society—government, media, schools, culture—to maintain and increase their dominance over us. What the slogan, “We are the 99%,” has done is bring power into the open and help change the political landscape.

Another criticism of “We are the 99%” argues that it implies a liberal politics of income redistribution and not a critique of capitalism. However, this ignores how OWS took shape. Public spaces were occupied; clashes with police ensued immediately; diverse discussions and debates took place; the movement spread rapidly across the nation and then the world; and millions of people were energized and made to feel part of something of great importance. Open air classrooms scrutinized critical issues. People learned that they could make decisions and effectively organize daily life. Those camped out in Zuccotti secured food and shelter, took care of sanitation, and solved complex problems of logistics every day.

These actions, combined with the anarchist and youthful sensibility and leadership of so much of OWS, gave rise to the posing of fundamental questions. What is democracy? Why don’t we have it? How do we dispense with ubiquitous hierarchies? Why is there so little solidarity, compassion, love? Why aren’t there enough jobs? Why is work so meaningless? Why do we devote so much of our lives to it? Why are we obsessed with making money and consuming things? Why are we destroying the environment that sustains us? Why does our government wage war against ordinary people, the 99%, all over the globe? These questions cannot be answered and the issues they raise resolved by more progressive taxes or a few expanded social welfare programs.

Our collective future is grim. Under our current political economic system, none of our major problems can be solved. Insecurity, inequality, and environmental destruction will get worse unless we take radical actions, repeatedly, for as long as necessary. OWS and “We are the 99%” were, and continue to be, ingenious interventions in what promises to be an era of growing class struggles. Other slogans will supplement “We are the 99%,” but I hope that the idea that “we are the many, they are the few” remains foremost in our minds as we combat our class enemies.

*This essay was published on counterpunch: http://www.counterpunch.org/2013/02/27/occupy-wall-street-and-the-significance-of-political-slogans/  A different version of the argument appeared in the Winter 2013 issue of New Labor Forum.