Home /The Road Beckons: Excerpt from Cheap Motels and a Hot Plate 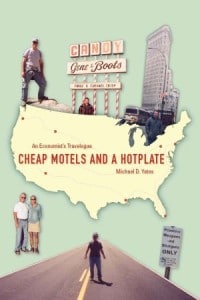 [Since Monthly Review Press made my book the special sale feature for September, I thought that it would be appropriate to end the month with an excerpt]  The distance between Pittsburgh and Johnstown, Pennsylvania, is about seventy-five miles. Most of the trip is on Route 22, a dismal and depressing stretch of highway that perfectly mirrors the drab ugliness of much of western Pennsylvania. Gene & Boots Candy shop, Dick’s Diner, Dean’s Diner, Zoila’s Western Diner, Country Kitchen (with “broasted” chicken), Dairy Queens, Crest Nursing Home, Spahr Nursing Home, 7-11s, car dealerships, a strip mine, the Cheese House, motels, strip malls, two adult video stores (a clerk was murdered in one of them, but the killer was never found), the country’s only drive-thru “Gentlemen’s Club” (aptly named Climax), the smallest house I have ever seen, feed stores, Long’s Taxidermy, Monroeville, Murraysville, New Alexandria, Blairsville, Dilltown, Armagh, Clyde, Seward, Charles, bad curves, black ice, fallen trees, wrecked big rigs, school buses stopping on the highway, kids walking slowly to the trailer parks and country shacks, mobile homes for sale, a power plant belching smoke and steam in the distance—not an eye-pleasing scene until you get to the Conemaugh Gap, where the waters raged in the Great Johnstown Flood of 1889.

When I was young, parts of this highway were three lanes, and you could pass in the middle lane from either direction. If you were traveling east and started to pass a car, you never knew when someone going west might have the same idea. After many accidents, the third lane was converted into a turning lane or a fourth lane added. Progress! Back then, Pittsburgh and Johnstown were steel cities, dirty, yes, but there was work at high wages. And a little pride too. Now both towns are in the rust belt. The famous Homestead Works of U.S. Steel, built by Andrew Carnegie and site of the Homestead strike, where the picketers set the barges filled with Pinkerton strikebreakers on fire with flaming arrows, have been torn down, replaced by an upscale shopping complex. Johnstown’s Bethlehem Steel plant, once the center of the industry’s technological advances, has been sold piecemeal. Train wheels, steel rods, and wire are still made there, but the size of the workforce is a tiny fraction of what it was when I started work in the “flood city.” Hard times have become a way of life. I would wager that there are more drug addicts and alcoholics in Pittsburgh and Johnstown than there are steelworkers. A lot more.

I spent nineteen years in Johnstown, but I never felt that it was my home. I kept moving from one part of town to another, nine moves in all, but a sense of place eluded me. I worried about this until I recognized that I didn’t feel at home anywhere. I grew up in a small factory town, and what I am now was shaped by the eighteen years I lived there. Yet I vividly remember coming back after my first two months in college. I was shooting pool in the clubhouse where my friends and I hung out. I looked out the window into the mid-fall night and realized suddenly that I was just a visitor. Today there is not a single person from my high school years with whom I keep in touch. I enjoyed college, but I have not remained in contact with any of my classmates, nor have I ever attended a class reunion. In 2004, I did return to give a public lecture, but I couldn’t wait to get out of there. The whole place filled me with dread; it was like being in a graveyard and seeing your own tombstone.