Home /Change We (Were Foolish to) Believe In 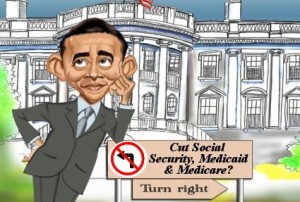 The U.S. 2010 midterm elections are over, and the postmortems have begun.  Katrina vanden Heuvel, editor of the influential liberal magazine the Nation and a frequent guest on television talk shows, said in a recent fund appeal,

There’s no disguising it, the results of the midterm elections were, with few exceptions, grim, as candidates who are intent on rolling back decades of economic and social progress were swept into office.

But this is no time to despair. It is time to stand and fight for a real debate about ideas and for small-d democracy. The Nation is committed to that work, and to ensuring that our truth-telling journalists lift their ideas into our country’s all-too narrow debate.

Before the elections, I kept getting emails from moveon.org telling me that this would be the most important election in my lifetime.  Those nasty Republicans, led by the crazy people in the Tea Party, were intent on overturning everything that the good Democrats had wrought.  Now Ms. Vanden Heuvel is telling me that this is going to happen unless we “fight for a real debate . . .”

Here is what I think. Thanks to government largesse, banks and other corporations are now awash in cash, and profits have soared to record levels. Yet, the banks are not making loans, and the corporations are not buying new equipment and opening new facilities.  Despite gross misconduct, no top corporate officials have been prosecuted, and many of the very companies that put the economy in the ditch are as flush as ever.  Were those nasty Republicans in power when this happened?  No.

There is an enormous shortfall of demand for goods and services in the economy, a shortfall only the government can possibly fill.  The best way to do this would be to engineer public employment projects.  There are thousands of possibilities, from public housing and transit to sewage system repair to the national parks and monuments.  State and local governments need help, as do the unemployed, whose ranks are filled with record numbers who haven’t worked in many months.  Has it been those nasty Republicans who are responsible for what the government has not done?  No.  It was the Democrats whose economic stimulus package was inadequate to the task at hand.  It was Obama who thought that all was well and began to talk about deficit reduction long before this was necessary.

In fact, it was Obama who appointed a deficit reduction commission, whose preliminary recommendations include raising the social security retirement age to sixty-nine, cutting the federal workforce by 10 percent, and lowering the corporate income tax.  These would each harm working people. Tens of millions of workers perform jobs that wreck their bodies and spirits long before age sixty-nine; to force them to work until then is unconscionable.  Furthermore, the social security system is now in good shape, and modest changes, such as an increase in the maximum taxable income, will keep it healthy for a long time to come.  Slashing the federal workforce will do nothing good for the economy.  Useful and efficient government agencies like the Social Security Administration are already overworked, and further cuts will reduce the quality of life for many people.  The corporate income tax is already low, and the share of federal tax revenues collected from corporations has been in decline for decades. The burden of this tax, according to most economists, is on stockholders, and given that stocks are disproportionately owned by the rich, it is a progressive tax, one that takes a larger share of income as income gets higher.  Cutting this tax will, therefore, increase an already remarkable income inequality, which will harm us in myriad ways, not least of which is a further reduction in our already anemic political influence.

Obama has escalated the war in Afghanistan, a war that seems to be endless and in which every soldier who dies does so for nothing.  The Afghan government is corrupt, as are the private U.S. contractors who perform tasks that the U.S. government ought to do.  The arch enemy of the United States, Iran, sends boatloads of cash to our corrupt stooges in Kabul, making a mockery of all the vitriol directed at Tehran (the Iranians are also strong allies of the Shia running Iraq).  Did those nasty Republicans force Obama to direct murder and mayhem against the Afghans?  Hardly.  Obama promised as much during his campaign against Senator McCain.

The Obama administration has ballyhooed its reform of the horrid U.S. healthcare system.  My friends at the United Electrical Workers union tell me, after careful study, that the new healthcare arrangements will be worse than what we have now.  I don’t doubt it.  The drug and insurance companies are drooling over all the money they’ll be making.  Medicare recipients are going to pay for part of the new plans with foregone benefits, and the federal government is still not going to use its enormous buying power to force the drug monopolies to lower their prices.  The Democrats put no effort into single payer, despite its popularity.  Now they are blaming those mean Republicans for promising to try to scuttle Obamacare.  But who is really at fault here?

Now that the Republicans control the House of Representatives, will the Democrats stand tall and fight them off with progressive principle?  Will they move to the left?  Only a fool like Katrina vanden Heuvel could believe this.  What is being played out here is as old as the rise of modern U.S. capitalism.  The Democrats and the Republicans take turns serving the interests of capital.  The Republicans rule with such disdain for the working class that a public backlash drives them from power.  Then the Democrats promote capitalism with a human face.  Business and its allies go wild and scare the people with stories about incipient socialism.  These days, with a moribund labor movement and limited public political sophistication, the scare tactics work pretty well.  The Democrats respond by moving to the right; the Republicans regain their lost political power; the Democrats shift further right; and then the Republicans win absolute power, and the whole sorry process starts over again.  Watch now as Obama gravitates to the right.  Watch as he parrots vanden Heuvel and babbles on about civility and calm debate.  Watch as he caves on rescinding the Bush tax cuts for the wealthy.  Watch as he turns up the heat on Iran when the next presidential election gets nearer.  Watch how he champions every kind of environmental degradation, from offshore oil drilling to hydraulic fracturing.  Watch how the liberals and their more thoughtless radical allies tell us that this is the most important election of our lifetimes.

When Obama was running for president, few liberals and for that matter, not that many radicals, wondered how an unknown junior senator with almost nothing on his political resume could become the Democratic nominee and then president.  It didn’t seem to occur to them that the money men and women must have thoroughly vetted him and found him to their liking.  That his populist rhetoric was just that, verbal bread and circuses to pacify the masses and give them false hopes.  There was plenty of evidence for this, available to anyone willing to look, as is made clear by Rodger Hodge in his aptly titled book, The Mendacity of Hope. I urge you to read the excerpts from this book on my friend Louis Proyect’s blog (Louis Proyect: the Unrepentant Marxist).  Or check out Adolph Reed and Glen Ford. Maybe my erstwhile radical friends, who went door-to-door for Obama, have now read such material and feel at least a little foolish for their naivete.  Surely their dreams for “change we can believe in” were dashed when they saw Obama eager to take the economic advice of a swine like Lawrence Summers.  If that didn’t do it, then maybe the recent revelation that George Bush told British leaders during the campaign that he would have endorsed Obama if they’d asked him will do the trick.  I can only hope so.

[Note: The cartoon at the beginning of this post is taken from the excellent Black Agenda Report, in an article by Bruce A. Dixon on Nov. 10, 2010.]

The Obtuseness of the "Left…